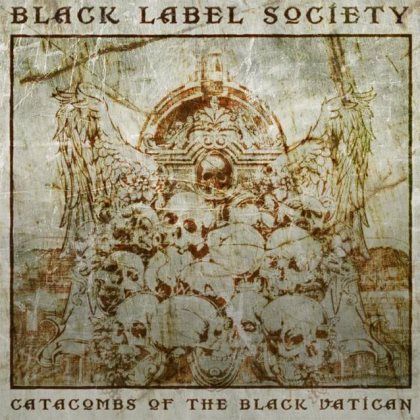 Catacombs of the Black Vatican

Following the departure of right-hand slinger Nick Catanese, Zakk Wylde gets back in the saddle and lets things ride for BLACK LABEL SOCIETY's latest album, "Catacombs of the Black Vatican". For longtime fans, this is the album they've been waiting for, no matter how devoted they've been to Wylde over the years. Less trickery and less slickness comes with "Catacombs of the Black Vatican", thus less is resoundingly more in this case.

Out the gate with "Fields of Unforgiveness", Zakk Wylde establishes a heavier prospectus than he has on the past couple BLS albums. Here and on the subsequent track, "My Dying Time", John DeServio divvies checked-down bass lobs, providing the right level of density for Wylde and new guitarist Dario Lorina to strum with principle and a decided melancholy that never grows melodramatic. They chuck and groove as Wylde croons affectively all over "My Dying Time" like the moment has a limit and now's the time to make a statement. As if he actually needed to.

The bluesy riffs on "Believe" keeps the song honest, since tempo-wise it doesn't get much further beyond its predecessors. The dirty cadence is what makes "Believe" work and if people were worried about the directions BLACK LABEL SOCIETY were taking with their recent ballads and melodic proto jams, then let the faithful have faith. "Angel of Mercy" is most definitely a softie with its string supplements and tuneful pleading, but there's a sense of gravitas to this track that yields a naked honesty. Zakk pulls off a well-played nod to Jimmy Page here and accordingly, thrusts genuine emotion into what emerges as one of his finest-structured ballads. Later, the second of the album's three ballads, "Scars", is another pulled down and emotive experience.

"Beyond the Down" is a tried 'n true BLACK LABEL SOCIETY jam, complete with Zakk Wylde's signature fret squeals (only PRONG's Tommy Victor can outmatch him in that department),and yet there's a stripped feeling to the jive 'n shuck feel to track that makes it a hair improved. "Beyond the Down" gets back into the same half-slide tempo of the album's opening tracks, but the muddy shamble of the song sets up a memorable, uplifting chorus and a nasty guitar solo that'll have Zakk's fans yelling "sick!" in tandem.

Really, the only itch to this album comes with the frequent drowning of the band in the mix during many of Wylde's solos. He is obviously the centerpiece of BLACK LABEL SOCIETY and his solos on this album are just as wicked as ever. Thus a little extra showcasing becomes a minor complaint, since "Catacombs of the Black Vatican" doesn't suffer all that much from those turn-ups. "Empty Promises" is so stuffed with mean, grimy riffs and a sluggish, clobbering beat from Jeff Fabb those substantial elements supersede everything else contained inside this monster cut.

"Catacombs of the Black Vatican" is perhaps a blue album for Zakk Wylde since it carries a heavy heart and not much in the way of pep, aside from the stepped-up ass kicker, "Damn the Flood". However, this is the most instinctive and dedicated BLACK LABEL SOCIETY album laid down in a while. The parting with Nick Catanese may be the instigating factor, but "Catacombs of the Black Vatican" trims a lot of fat and carries its leftover cruising weight with enthusiasm.