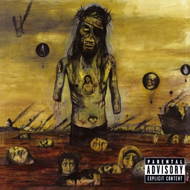 Everyone's known it for years: while SLAYER is widely considered one of the greatest live metal acts of all time, the band has not made an equally great album since 1990's "Seasons in the Abyss". That record brought together the speed and fury of "Reign in Blood" (1986) with the experimental nature of "South of Heaven" (1988) marking a creative and commercial peak that the band has never reached again. Coincidentally, that was also original drummer Dave Lombardo's final studio effort with the group — until now.

Since "Seasons", SLAYER has wandered in an abyss of their own making, churning out regurgitated riffs and recycled ideas throughout albums such as "Divine Intervention", "Diabolus in Musica" and "God Hates Us All". Each of those efforts contained several bright spots, but the group (which mostly utilized ex-FORBIDDEN drummer Paul Bostaph during this period) failed to record an album as powerful from start to finish as its earlier trilogy of masterpieces. With Lombardo returning to the live act a couple of years back, and the original lineup entering the studio last year to work on its first studio album together since "Seasons" (and first new SLAYER album since "God" in 2001),expectations this time were perhaps a bit higher.

Well, I can safely say that "Christ Illusion" is the best SLAYER album since "Seasons" — and if it's not the great SLAYER album we've been waiting for, it comes closer than the band has in 16 years. It reaches for that greatness on songs like "Flesh Storm" and "Cult", yet falls short on others. One thing's for sure: Lombardo's influence on this band is absolutely undeniable. With no disrespect to Paul Bostaph, a fine drummer (and Jon Dette, who also did some work with the group in the mid-Nineties),Lombardo is simply essential to the SLAYER sound. He is one of heavy rock's all-around best drummers, perhaps the very best in the field of thrash /speed metal, and his power, style, and chops — not to mention his intangible chemistry with the rest of the group and those amazing flying feet — bring SLAYER's overall performance, intensity and music to a higher level.

The five years between albums has also improved frontman Tom Araya's game too: he sounds more committed and convincing here than on the last couple of records, and his voice is also less strained and more reminiscent of the fierce demon of songs like "Angel of Death" and "War Ensemble". If anything holds the band back from being truly on top of their game though, it's still a nagging problem with the riffs and songs themselves. Kerry King (who wrote the majority of the album) and Jeff Hanneman are still pretty much re-using basic ideas from their back catalog, giving chunks of "Christ Illusion" some of the same sense of having been heard before as the previous three studio efforts (not counting the punk covers collection "Undisputed Attitude").

Having said that, however, even when the material sounds familiar, there's an extra intensity here that was noticeably lacking for the last decade or so. While a handful of songs are either too generic or the arrangements too clumsy to work well (I'm looking at you, "Jihad" and "Skeleton Christ"),there's several that ride out even the non-fresh nature of the riffs with the kind of raw energy that no one can beat SLAYER at. Kudos to producer Josh Abraham for capturing much more of the spark than has been apparent on the last few records (and for everyone freaking out about the fact that he's produced acts like STAIND, relax — a good producer gets the sound the band wants, not what he personally likes).

While not consistent, SLAYER does hit the jackpot songwise several times on "Christ Illusion". Opener "Flesh Storm" is pure raging fury at 200 miles an hour, while "Eyes of the Insane" and "Catatonic" have that slow, grinding feeling of doom that the band has done so well before on classics like "Dead Skin Mask". "Consfearacy" is a compact thrasher with some surprisingly political lyrics from King (seems like he's come a long way from being a "Dittohead"),while "Black Serenade" features some of Araya's darkest serial killer thoughts yet over an ominous, rumbling riff courtesy of Hanneman.

The prizewinner, however, is undoubtedly "Cult", which begins with an epic, building riff before exploding into the kind of relentless, dangerously anthemic thrash that SLAYER are undisputed masters of. The chorus sears itself into memory the first time you hear it, the bridge is undeniable, and the whole thing roars along with the same kind of urgency and power of milestones like "Chemical Warfare" and "War Ensemble". It may in fact be the first SLAYER song in a long time to be worthy of status alongside the band's greatest tracks, and also features some of King's most bluntly anti-religious lyrics ever ("Religion is rape/Religion's obscene/Religion's a whore/The pestilence is Jesus Christ/There never was a sacrifice/No man upon the crucifix" – go Kerry!).

Album closer "Supremist" gets off to a somewhat unsteady start before blowing the doors off with a manic conclusion featuring tons of unbelievable machine-gun double bass from Lombardo, whose feet thunder across this album in trademark brilliant style and provide a constant propellant to his charged-up bandmates. SLAYER may never make an album as incendiary as "Reign in Blood" again, or write a blood-chilling classic like the aforementioned "Dead Skin Mask", but "Christ Illusion", while flawed, proves that the band still has a few tricks up its sleeve and one very potent weapon behind the kit. And like only a handful of metal bands in the genre's history, the group has never compromised its sound or integrity for commercial gain, some 25 years after the original members first got together. That, my friends, is no illusion.