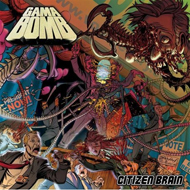 The new/old school thrash resurgence continues to pick up steam. We've seen established bands finally get their due, new bands sprouting up left and right, and metal labels scrambling so sign nearly any act with an affinity for EXODUS or KREATOR riffs. Brings back memories for those who came of age in the 80s, doesn't it? We've been lucky that most of these bands have been at least tolerable, very few outright sucking and most falling somewhere between just-better-than-average (HATCHET) and outstanding (MERCILESS DEATH). Market tightness is inversely proportional to expectations though, as each new release brings with it greater skepticism as to whether the next product be the stink bomb to end all stink bombs. With the release of "Citizen Brain", Ireland's GAMA BOMB proves that there are still some terrific vintage thrash bands with which to mosh out there.

Of the multitudes of new thrash acts I've heard the past several years, GAMA BOMB is one of an elite group that includes the likes of MUNICIPAL WASTE and MERCILESS DEATH. The laundry list of influences that are heard on "Citizen Brain" include many in the same group you've been reading about in just about every review of a new thrash disc (EXODUS, etc). D.R.I. tomfoolery creeps in as well. In the case of GAMA BOMB the style is largely of the beer-soaked-fun/B-movie-horror/dedicated-to-thrash — as opposed to the darkness-and-evil — variety. The boys love the video games as well. The operative terms here are "spirited", "fun", and "mosh-worthy."

Beyond the loads of strong riffs and screaming guitar solos, GAMA BOMB primarily excels in two areas: (1) writing basic, yet memorable, hooks; and (2) penning uproarious lyrics. "Global Warming", "Zombie Blood Nightmare", and "Hammer Slammer" are just a few examples of the band's ability to knock out choruses that are catchy as fuck. In some cases, such as on rip-roarin' anthem "Hammer Slammer", the speeding pace and backing shout punch-ins reminds one of the happy-thrash antics of early ANTHRAX. After all, thrash is supposed to be fun and GAMA BOMB makes it so with lyrics to songs like "Sentenced to Thrash", "Bullet Belt", "Space Invaders", and "Zombi Brew" that will infect your brain, causing a perpetual inebriation smile, a fist in the air, and a bad case of whiplash. Vocalist Philly Byrne has a real knack for delivering the quick patterns too, something that would go south quickly for a singer that couldn't stay in lockstep with the band's fast and tight delivery.

Those that like their thrash to sound more organic and crackly may find fault with Scott Atkins' crisp and clean production (the digitized precision of the drumming does come off stale at times). If you can handle that and acknowledge that there is nothing new under the sun, then you'll be all set to let the good times roll with "Citizen Brain".