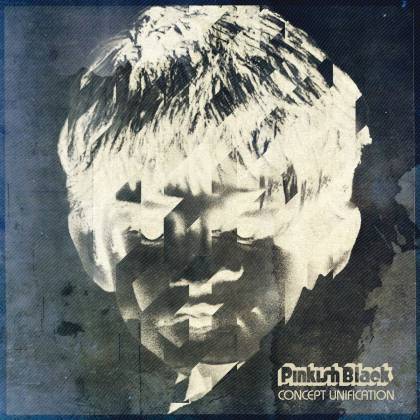 There was a time when two-piece bands were a novelty. At this point, you can barely sneeze without hitting at least one act that has ditched guitars or bass in favor of an arsenal of FX pedals and analogue synths. And yet, even in an increasingly crowded marketplace, PINKISH BLACK continue to make music that sets them apart from just about everything else, fellow four-legged experimentalists included.

When a band instinctively disregards the rules with such determination, noting evolutionary changes seems a somewhat redundant exercise. In truth, "Concept Unification"does expand on the Texas duo's three previous records, but these songs feel more like unexpected fever dreams than calculated attempts to do something different. The opening title track generates huge amounts of atmosphere, with a faint resemblance to ZOMBI in their imperious "Spirit Animal" phase. Unlike their Moog-wielding peers, however, PINKISH BLACK are only psychedelic in the post-Altamont bad-acid sense, with keening synth melodies that hover like phantasms over a hypnotic nine-beat pulse. It's followed by "Until", a surging four-minute dark rocker with an insistent chorus: proof that PINKISH BLACK can cause mayhem inside the box, while still generally thinking outside it. "Dial Tone" is an obvious highlight here, like some ghostly flipside to the title track, it pitches Daron Beck's vocals against a perpetually undulating wall of scabrous bottom end and martial throb.

Back in instrumental waters, "Inanimatronic" is a riveting exercise in pitch-black ambience and industrial grinding. It's as bleak and unsettling as any BLUT AUS NORD record, but with an underlying sense of humanity and even vulnerability. Bearing in mind this band's backstory — their early days as THE GREAT TYRANT and the tragic suicide of band mate Tommy Atkins — it's impossible to absorb all this darkness without factoring in the very real and emotionally driven elements behind it, all of which reach a zenith of potency in this album's extraordinary closing track, "Next Solution": 11 minutes of slow-burning anguish and coruscating perma-rumble, imbued with a LED ZEPPELIN-like stateliness but as intense and ritualistic as SWANS at their mid-'80s peak. Riffs erupt, distortion rages and Beck howls, enraptured, in the mid-ground. You won't hear a more electrifying journey through cerebral shadows this side of the last YOB album. When the song shifts pace at the six-minute mark, zooming off toward the heart of the sun with escalating aggression, it's genuinely thrilling. When it collapses back into somnambulant mode, heavier than ever, it's truly devastating.

Fans of intangible blobs of data will be delighted to know that the digital version of "Concept Unification" boasts two extra tracks. "Away Again" offers a gorgeous spiral of dark arpeggios, monotone vocals and subterranean bass that mutates into a bruised but hazy gothic ballad, which should almost certainly be regarded as part of the album proper. Finally, "We Wait" is a rasping, post-punk vignette, with hissing beats fighting their way through clouds of reverberant synth, like JOY DIVISION remixed by BLANCK MASS.

Heavy in every sense but endlessly creative too, "Concept Unification" is the strongest and most affecting statement yet from this unique band. It's not an easy ride by any stretch, but the rewards for diving in are incalculable.