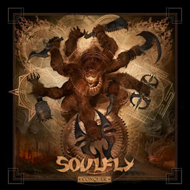 Four months after Max and Igor Cavalera finally answered the cries of fans far and wide and unleashed their CAVALERA CONSPIRACY upon the world; the former shifted his focus back to his day job and hit us all with "Conquer". While an argument could be made that by splitting his time between both projects almost simultaneously might have lessened the impact either could have made, "Conquer" is exactly the follow-up that SOULFLY's 2005 release, "Dark Ages" deserves.

Being the ever-evolving beast that SOULFLY is, many probably wondered if Max's return to his thrash roots on "Dark Ages" would stick. The answer is a resounding "and then some." In many ways, "Conquer" and CAVALERA CONSPIRACY's "Inflikted" are similar in that they both speak to Max's rekindled interest in the "Arise" and "Chaos AD" days (although I'm a firm believer that, since its inception, "Roots" has been the yardstick by which the groove-metal guru measures anything he writes). Where "Inflikted" did that with a strong hardcore/punk edge, "Conquer" adds SOULFLY's globally and spiritually-influenced progression and more than a touch of death metal to the mix. The albums starts off by firing on all cylinders with "Blood Fire War Hate"; an appropriate title thanks to it barbaric intensity that brings those words to life. MORBID ANGEL's David Vincent lends an extra helping of vocal ferocity to the tune, which is almost ironic considering that "Touching The Void" (featuring instrumentalist Fedayi Pacha) is based around a plodding, demonic groove that could easily the "Blessed Are The Sick" or "Covenant" sessions. The only other guest performance featured on the disc comes from THROWDOWN vocalist Dave Peters on the rhythmic "Unleash". Bulldozers in their own right, the aforementioned tune, along with "Enemy Ghost" are among the only tracks catch Max briefly reaching too deeply into his old bag of nu-metal tricks; resulting in a few moments that drag enough to almost merit use of the "skip-forward" button. Much of the hellfire that has been lit beneath SOULFLY's ass comes from Cavalera's increased faith in the talents of his right-hand man, Marc Rizzo. One of metal's most skilled and versatile shredders, Rizzo's fingerprints are all over "Conquer" in the form of fiery solos ("Warmageddon" is a great example),melodic overtones and the abundance of sweeps and squeals heard throughout the disc. Of course, it wouldn't be SOULFLY if there weren't random bits of multi-cultural interjections tossed in amidst the chaos, and this time out "Doom" takes the title of most well-placed, when the band takes a monster groove and slides effortlessly into a smoky reggae jam. Continuing the series of eponymously titled instrumentals. This instillation, "Soulfly VI", is perhaps the most tuneful of the bunch with a soaring lead melody reminiscent of something you might hear on Steve Vai's "Passion And Warfare".

After repeated listens, the first being the most forceful, it's safe to say that "Conquer" will be a standout among the SOULFLY catalogue. "Dark Ages" might have carried with it a more attention-getting shock to the system, but "Conquer" brings that, along with a more solid and focused delivery. From a songwriting stance, the album sees the aspects of Cavalera's evolution as a musician all merging comfortably into one another. Essentially, "Conquer" is the quintessential SOULFLY album that, thankfully, features much more of the good than the bad.