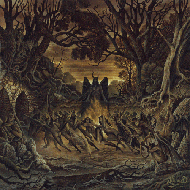 01. Crowned Infernal
02. At Death's Command
03. Cast Into The Fire
04. Beneath The Blood Red Moon
05. Dawn Of Satan's Rise
06. The Beast Of Revelation
07. Witches Sabbat
08. Summoning The Ancient Hordes
09. Necromantic Rites
10. Hymns From The Shadowland
11. Sacrificial Kingdom

When I reviewed SATHANAS' "Entering the Diabolic Trinity" for this site I emphasized the no-nonsense, in your face approach to its fierce brand of stripped down blackened thrash. SATHANAS is indeed a band that takes cues from the old school, mainly because they were part of the old school (the "Ripping Evil" demo was released in 1988) and understands how to ride a double-bass driven thrash groove that drips with iniquity better than most. So with the act's sixth full-length album, "Crowned Infernal", on Singapore's Pulverised (Note: the group is currently seeking a new label for the next release),has the band updated its sound to a trendier, mass appeal style of 'core thrash? Hell no! The approach remains the same, but the songs are better and the sound is loud and scathing beyond belief.

Though the arrangements on SUMMON's "Fallen" are more intricate, the spirit and feel is similar to what is heard on "Crowned Infernal". By that I mean, a face melting, evil as hell, ride to the bowels of Hell. As alluded to above, the formula is one that focuses on a pummeling verse and a simple, memorable chorus. Songs like the title track and "Beneath the Blood Red Moon" will have you alternating between snarling and trembling at the sheer ferocity and pure wickedness of it all. Guitarist Paul Tucker delivers his vocals with an earsplitting rasp and periodically utilizes well-place death growls to drive the point home.

The recording is excellent, bringing out lots of piercing high end and still managing to maintain the driving bass lines of Bill Davidson and the thunderous drumming of Jim Strauss. Recording at Inner Tube Studios (Ambridge, PA) with producer Nick Kucel and mixing/mastering at Necromorbus Studios in Stockholm, Sweden with Tore Stjerna was the proper choice, based on the sound of this fireball.

When it comes to blackened thrash, you'd be hard pressed to do better than "Crowned Infernal". SATHANAS is a band that has stuck to its guns and never gave a shit about bandwagons. Check this trio out soon and grab a copy of "Crowned Infernal".