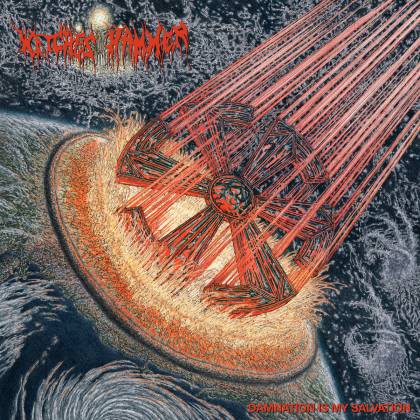 Damnation Is My Salvation

WITCHES HAMMER first began their death rumblings way back in the mid-eighties, and now the band is simply legendary in the extreme metal underground. Their reputation has only been solidified by the fact that key member Marco Banco played on BLASPHEMY's 1990 war metal benchmark "Fallen Angel of Doom….". The guitarist looks gargantuan and Herculean nowadays, the polar opposite of his appearance when he was just a young 14-year-old buck when WITCHES HAMMER formed in 1984. But the act has established its name based upon its own merits, which are interestingly enough rooted in just a handful of demos, compilation appearances and EPs. Thanks to the blacker than black label Nuclear War Now! Productions, and 36 years after its inception, WITCHES HAMMER has finally unleashed its debut full-length album. "Damnation Is My Salvation" is a collection of new timeless-sounding, vibrant songs alongside re-recordings of a trio of songs from the band's old demos: "Frozen God", "Deadly Mantis" and the eponymous track "Witches Hammer". The wait has been long, but it has been worth it. "Damnation Is My Salvation" is a tour de force of classic death thrash supremacy.

"Damnation is My Salvation" is sure to pump listeners' adrenaline into overdrive, but upon close examination following the initial overwhelming impulse to simply bang your head and lose your mind, there's more here than meets the eye. This is a far cry from nouveau tech death or anything of the sort. But beyond the aforementioned death and thrash styles, there is an undercurrent of evil black metal and even a few touches of Banco's BLASPHEMY-esque war metal beneath the surface. The musical darkness is adequately narrated by snarling vocalist Rayy Crude, the only original band member alongside Banco. Together with their new lineup, the sky seems to be the limit, if "Damnation is My Salvation" is any indication. The release is extremely well written and memorable from front to back.

Common classic reference points are evident without the pitfall of plagiarism. The title track sounds like early METALLICA and SLAYER on crack. And the brazen, classic death metal belligerence of opening number "Across Azeroth" sounds like POSSESSED on steroids. The sounds, style and essence aren't anything new. Yet WITCHES HAMMER have earned their reputation and are likely to continue to stand out due to their unique, signature approach to assembling those familiar metallic puzzle pieces into something that's very much their own creation. If bands like ARES KINGDOM, AURA NOIR and DESTROYER 666 are up your alley, it would be worth your while to hear those evil sounds back from the original source: the cauldron that includes the magnificent work of WITCHES HAMMER.