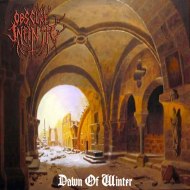 01. Summoning of the Ancient Ones
02. Sacrificial Ritual
03. Morbid Ways of God
04. Foreshadowing of a Coming Storm
05. Everlasting Fires
06. Incinerator
07. In the Depths Below
08. The Firmament Breathes Eternal Tranquillity
09. Dawn of Winter
10. Wreak Havoc – A Blackened Mind
11. Transmitting Life to Darkness

A diamond in the rough, a previously undiscovered gem… Pick a cliché, what matters in the end is that OBSCURE INFINITY's "Dawn of Winter" is one of the best death metal releases of 2010, old school or otherwise. This is a group that gets it right on numerous levels and leaves an impression that lasts.

The big deal is not that OBSCURE INFINITY has turned the beloved style on its head nor pushed the boundaries of creativity. The simple fact is that "Dawn of Winter" is masterfully composed, delivered to you with a warm/organic sound, and invokes that all-important feeling of dread into which only the best acts are able to tap, while spilling over the dies with early 90s energy and the utmost subgenre relevance. This is an example of a death metal band that does what it does as good as some of the legends and better than many of its modern day peers.

Possessed of the spirits of the ancients, "Dawn of Winter" makes each riff count and every compositional turn exciting, while ensuring that the brutality is matched with just enough melody to make individual tracks memorable. A handful of atmospheric and acoustic interludes serves the larger effort well; the album wouldn't be quite the same without chillers like "Summoning of the Ancient Ones", "Foreshadowing of a Coming Storm", and "The Firmament Breathes Eternal Tranquillity". The proper compositions arrive with fiercely growling, unforgettable riffs that knock the unprepared listener off his feet. One example is the opening six-string swirl of "Everlasting Fires", which connects like a right hook to the jaw, rivaled only by the riff that explodes out of an ominous build on "Morbid Ways of God", the latter turning into a seven minute display of arrangement dynamics. THE CHASM's dark shading, the spirals into madness of early MORBID ANGEL, GRAVE's putrescent bludgeoning, and a few nods to DISSECTION's melodically sinister prowess, "Dawn of Winter" pays tribute by standing firm on the fundamentals and creating an identity all its own.

The German band's disc has been hiding in underground distros in North America and it is your duty as one of the lucky ones that snags a copy to tell all your friends and introduce this superior album to the world. OBSCURE INFINITY deserves far wider recognition and "Dawn of Winter" is worth the price of admission many times over. Unless your minimum standard is one of originality, you cannot go wrong with this release.