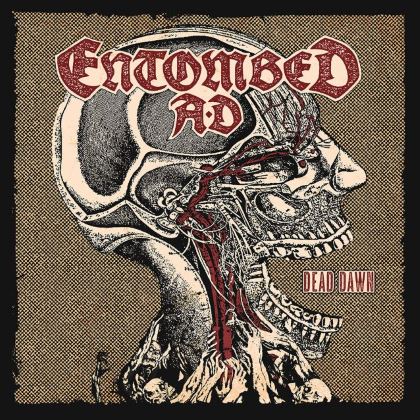 Life after death — or death metal, if you will — has become ENTOMBED A.D.'s totem. After grinding it out in court over legal battles to the band's moniker, Lars-Goran Petrov, Olle Dahlstedt, Nico Elgstrand and Victor Brandt triumphantly returned under a rebrand and delivered a knockout album, "Back to the Front". Well-received by the metal community, ENTOMBED A.D. wastes no time delivering "Dead Dawn", an album equal to its predecessor. Death metal, thrash, punk, crunk, hardcore: it's all in here again, and shrewdly assembled for another romping good time.

ENTOMBED A.D. immediately asserts the album's ferocity by dropping "Midas in Reverse" on a set course of speed with a few slowdowns, including a chewy bridge that crawls then leaps into a dizzying solo section. L-G Petrov issues his customary yaps and pukes as the band drops rock-driven knocks upon the title track's verses, then thrusts with clobbering velocity on the verses. Wedged into the mix for style points is a pulled-back set of doom and power metal progressions.

Thus ENTOMBED A.D.'s spirit of tinkering continues on this album, and as with "Back to the Front", it all works like a champ. Only these guys can make a conventional rock jam like "The Winner Has Lost" sound borderline extreme in the process. "Down to Mars to Ride" worms through a tricky intro with woozy guitars then easily slips into a stomping mosh. Nico Elgstrand and Victor Brandt strum some filthy, buzzing lines as Olle Dahlstedt slaps out a hard and steady beat and L-G Petrov comes as close to mustering a sing-along (in growl form, of course) as he can. Not satisfied enough to let "Down to Mars to Ride" simply hum, the song changes course for a moment, yet it doesn't lose its sonorous destination.

"As the World Fell" is five-and-a-half minutes of slogging slop, bogged by droning riffs, unrushed pummeling and nauseous ralphing. Still, there's a groove and some stinging solos by Nico Elgstrand to counter the song's cantankerous drone. Ditto for "Hubris Fall", which has delicate piano lines acting as conscience over the band's lingering spew. On the flipside, "Total Death" lets it rip for three minutes of swift hardcore bliss. ENTOMBED A.D. brilliantly fakes a slowdown at the two-minute mark of "Total Death", but immediately springs back as Petrov bellows "It's only rock 'n' roll!" "Silent Assassin" is another hardcore-spooled twirler that grows more intense the more Nico Elgstrand's guitars layer. "Black Survival" goes even faster incrementally as ENTOMBED A.D. crams thrash and grueling death metal modes together. Nico Elgstrand and Victor Brandt reserve their deadliest shredding for this one.

Not that there are any real surprises at this point to ENTOMBED A.D., the fun comes in hearing what tricks they'll pull out, much less how they'll arrange them. "Dead Dawn" is another winner, a bestial, gory album swamped with hooks and assorted mash-ups to counter its grisly splatter.