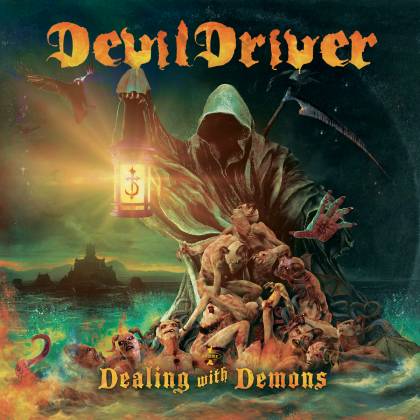 Dealing With Demons I

With their 20th anniversary only two years away, DEVILDRIVER could be forgiven for being slightly complacent at this point. Firmly established as a regular fixture and widely acknowledged as one of the hardest working bands on the planet, Dez Fafara's crew have weathered two decades with credibility intact and a sturdy catalogue backing up their ferocious reputation as a live band.

Admittedly, only Dez remains from the band's very first lineup, but their endlessly malleable take on groove-driven, brutal metal has endured regardless. One listen to the obscene amounts of fun DEVILDRIVER were having on 2018's "Outlaws 'til the End" suggested that Dez had assembled a refreshed lineup that could breathe plenty of life and fire into the whole thing, but it's "Dealing with Demons I" (the first of two albums bearing the same name) that confirms it. Darker and more aggressive than any of their albums since 2011's "Beast", and yet also more inventive and adventurous than anything the Californians have done since "Pray for Villains", their ninth full-length might not feel like a complete revamp or upgrade, but it's the sound of a page being turned and bright new futures opening up.

The difference between this and DEVILDRIVER's last album of original material, "Trust No One" (2016),is all in the subtle details. The essence of the band's sound remains the same, with a powerhouse rhythm section propelling churning but melodic death metal riffs along at a tooth-dislodging clip, and Fafara's scabrous roar remains a perennial and welcome focal point. Here he sounds even more incensed and mad-eyed than usual, but even he has branched out, adding some impressive and grittily soulful clean vocals to one fizzing standout, "Wishing". First single "Keep Away From Me" is another compelling blend of the alien and the familiar: the riffs are certainly recognizable as DEVILDRIVER's, but there's an ominous atmosphere and priapic swagger to the delivery that feels a world away from old anthems like "Clouds Over California" or "End of the Line".

Dez has described how this double album represents the ultimate clearing of emotional, personal and cosmic decks, and while it's hardly a novelty to hear him bellowing like his life depends on it, there's something new about his presence on this record. Even the ghoulish, gothic nightmare of "Iona" seems to draw something deeper and more primitive from the veteran frontman. Equally satisfying is the sound of DEVILDRIVER still cleverly sidestepping comparisons with any other modern metal band. The most succinct moments on "Dealing With Demons I" are sound crafted specifically to cause as much mayhem in the pit as possible, but neither "Vengeance Is Clear" nor "Witches" have been anywhere near a cookie cutter.

Eighteen years on from taking the post-COAL CHAMBER plunge, Dez Fafara keeps defying the odds and making face-removing metal records that, at their cudgeling best, really hurt. If the second half of this mammoth endeavor matches the first, this will be remembered as a pivotal moment in the DEVILDRIVER story. Even if it doesn't, this rips.