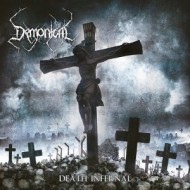 This is the one; the album on which DEMONICAL fires on all cylinders and delivers a Swedish death metal album that rivals anything that DISMEMBER, UNLEASHED, and GRAVE have released the past several years. You may have read the prediction that REVOLTING's "In Grisly Rapture" would end up one of the year's best Swedish death metal releases, particularly for its balance of aggression and melody. "Death Infernal" is the other album in that small group of releases, though the emphasis here is on the more traditional, Sunlight buzzed, Stockholm end of the spectrum.

If you guessed that the difference maker with "Death Infernal" compared to previous DEMONICAL releases and to Swede-death albums of this ilk in general is the songwriting, the pat yourself on the back. It is more memorable, more varied, and as a collection works smashingly well. In other words, several of the same qualities that put "In Grisly Rapture" over the top are present on "Death Infernal" as well, except the DEMONICAL's style of composition is closer to that of DISMEMBER in pure heaviness and to some extent song construction, not to mention production tonnage. Yeah, this is one big 'n beefy son of a bitch.

However, "Death Infernal" also reveals material that departs from the fast 'n furious two-beat DISMEMBER-ish approach, which is also written as much for the force of the punch as it is for memory retrieval. "March for Victory" features a great melody that has as much to do with AMON AMARTH as it does DISMEMBER. If you're lucky enough to get the limited edition, then you'll get a song that is even more in the AMON AMARTH vein, an epic piece called "From Northern Shores". Let's put it this way: you definitely want the limited edition, which also includes the "Night of the Graveless Souls" bonus cut. In fact, I'm so used to the limited edition (and didn't even realize those were bonus tracks until late in the review process),that I couldn't imagine "Death Infernal" without them.

So aside from another slight departure — this time into mid-paced, HYPOCRISY territory — called "All Will Perish (The Final Liberation)", which also happens to be a highlight, "Death Infernal" is one knockout punch of rugged, rumbling Stockholm-style Swedish death metal after another and all of it sticks to the ribs. Let's hope Metal Blade sees fit to license "Death Infernal" for North American release. Even if they don't, the import price is more than worth it. Highly recommended!