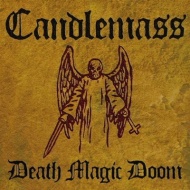 Hopefully, not many people are still sitting around crying into their chainmail that portly diva Messiah Marcolin is out of CANDLEMASS and isn't coming back. And if they are? Their fucking loss. Texan Robert Lowe, of terminally unappreciated doomsters SOLITUDE AETURNUS, is now on his second full-length outing with the Swedish doom metal gods, and his wild-eyed, soaring metal siren of a voice has arguably never sounded better. The re-energized band has risen to the challenge on this, the first album written specifically to Lowe's voice, and created a ferocious, epic piece of dynamic heavy metal that stands with the best work in their storied history.

If you want funereal dirge, the appropriately-titled "Hammer of Doom" will obliterate you, with a lurching SABBATH-ereal riff and haunting, epic vocal melody. But to get to it, you're gonna have to go through the positively fast-paced "If I Ever Die", a fair gallop of an opener with impassioned soloing and plenty of unique moments for Lowe to theatrically steal the show. And "The Bleeding Baroness" leavens its molasses slog with several quirky tempo shifts and a mournful, pathos-driven chorus that'll take days to leave your skull.

"Demon of the Deep" and "House of 1000 Voices" are perhaps the most typical CANDLEMASS songs enclosed here, but even they are infused with, I dunno, a dirtier sound, a less stately, more sinister and malevolent vibe, without veering from the classy and melodic standard the band has set over two decades. The chaotic, seething "Dead Angel" follows, its creepy and unsettling verse melded to an unwieldy but stirring chorus. "Clouds of Dementia" seems pretty typical on first listen, but the masterful shifting of the rhythms under the guitar solo, the gradual buildup of the verses, and Lowe's effortless manifesto of sorrow all make for a harrowing listen. Closer "My Funeral Dreams" is perhaps the simplest, and least impressive, of the songs here, but it serves its purpose of winding down the record with the restrained grace of an elegy. (Not sure which versions contain bonus track "Lucifer Rising", a disposable, simple but oh-so-fun double-kick-driven classic barn-burner, but I'm glad mine has it.)

The point of all this laundry-list analyzing? Quite simply, it's that CANDLEMASS have hit all the touchstones expected of such an iconic band — they're not going to pull a "Cold Lake" on you at this stage of the game, even with a new-ish frontman. Yet they've managed to create their most diverse, eclectic album in a decade, one that avoids any hint of stereotypical typecast monotony but infuses every note with the proper atmosphere, a patina of the majestic, all-encompassing DOOM they practically invented. It's too early to really stack "Death Magic Doom" against the rest of the catalog (although we can safely say that it ranks high on the "goofiest album title" ranking)... but don't be surprised if many of these songs wind up among the band's all-time classics.

I've read that bassist and songwriter Leif Edling is calling this their best album since 1987's "Nightfall". You know what? He may be right. It's definitely one of the finest metal moments of 2009, and a testament to the power of rejuvenation, enthusiasm and the alchemy that even old vets can wield when they finally get the right men for the job. In that respect, as well as in its dark and haughty atmosphere, it's almost a companion piece to HEAVEN AND HELL's new effort — though as great as that album is, CANDLEMASS did them one better, bringing all the aura and twice the songwriting and passion to the table.

No one can, or should, take away from the legacy Messiah Marcolin built with CANDLEMASS — but as "Death Magic Doom" firmly insists, there's plenty of room for new legacies to rise next to ancient dreams. A masterpiece.