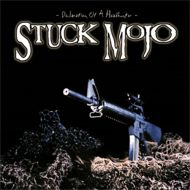 Declaration of a Headhunter

Following a two-year recording break after the release of 1998's excellent Rising effort (discounting the Hvy1 live CD, which included a couple of brand new studio cuts),Atlanta's STUCK MOJO have returned with their fourth, and possibly their finest, release to date. Produced, once again, by Andy Sneap, Declaration of a Headhunter features an increased emphasis on melody and a sound that once again revolves largely around the catchy, deceptively simple sounding songwriting style of guitarist Rich Ward—a true modern-day riff-meister and one of metal's brightest talents—whose efforts have never sounded quite as convincingly original as they do here.

At one point, there was some concern on the part of the band's fans that STUCK MOJO would not be able to continue their natural musical progression following the departure of bassist/vocalist Corey Lowery, whose impressive lead vocals contributed greatly to the increased accessibility of the band's last two albums. Thankfully, the addition of Dan Dryden (formerly of BELT FED, a band that also featured in its ranks current STEREOMUD frontman Erik Sebren, a.k.a. Erik Rogers),and Ward's own improved vocal skills have lessened the blow, with virtually every cut on Declaration… containing first-rate pop hooks that will undoubtedly raise the band's commercial potential beyond their current 50,000 fan base.

Considering the overwhelming popularity of the rap/metal hybrid, it only follows that a band like STUCK MOJO—who have been performing this kind of sound longer than virtually anyone else—will finally come closer to receiving the kind of universal acclaim that they've deserved all along. As one of the most hardworking and focused bands on the current heavy rock scene, they've certainly earned the right to stand next to the genre's commercial frontrunners, and here's hoping that it happens sooner rather than later.