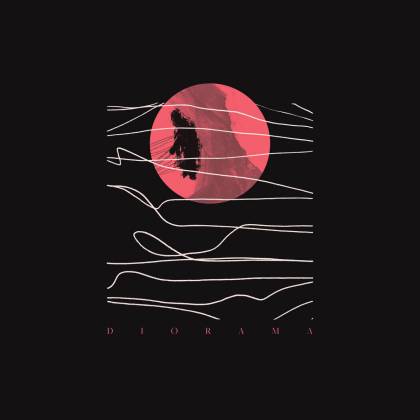 Denmark's resurgence as a major force in heavy music continues apace, with MØL firmly at the forefront of that nation's creative surge. It was obvious from 2018's debut album "Jord" that this band were injecting some much-needed originality into an increasingly stagnant post-black metal/shoegaze scene (if, indeed, something so hazy and non-committal could ever be described as a proper scene). Although not vastly different from many of their peers, no one could have accused MØL of sticking to some predetermined script. In fact, as with recent albums from DEAFHEAVEN and GHOST BATH, "Diorama" noisily seeks to establish the Danes' sound as a distinctive entity unto itself. The barrage of blackened scree and the gently ululating waves of post-rock atmospherics are here too, of course, but the course being followed is plainly one of the band's own design.

Opener "Fraktur" is a blur of aggression and elegant melody. Initially propelled along upon a skittering, nerve-jangling beat, it morphs and meanders with seamless abandon; simultaneously ferocious and lush. "Photophobic" is more of the same, but considerably more brutal, and with several serrated-edge riffs that cudgel their way into the foreground, amid flailing blastbeats and tangible menace. Equally at home with machine-gun, staccato riffing and epic, quasi-inspirational melodic crescendos, MØL are growing in confidence as songwriters: "Vestige" is a prime example, with its effortless transitions between angular, scabby-skinned brutality and huge, unapologetic hooks that spiral away into the ether, their creators' warped pop sensibilities on full show.

"Diorama" becomes even more interesting as MØL head deeper into the dark. "Tvesind" is an epic slice of deeply peculiar and wildly dynamic black metal: not a second of its eight minutes is wasted, as monstrous onslaught shape-shifts majestically into stately post-rock funeral parade and a droning, sonorous coda. Even more hypnotic is the title track, which mournfully basks in the spectral shimmer of old-school shoegaze, while steadily building towards the mother of all feedback-drenched crescendos.

Masters of known tropes and subversive freethinkers, MØL's new way of doing things has grown into something gripping and substantial here. As ever, the difference between the real deal and the thoroughly mediocre is brought into sharp focus. And as extreme as "Diorama" often is, the distinct possibility that this band might have an extremely bright future ahead is hard to ignore.