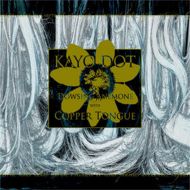 01. Gemini Becoming The Tripod
02. Immortelle And Paper Caravelle
03. Aura On An Asylum Wall
04. ___ On Limpid Form
05. Amaranth The Peddler

Eight musicians play an assortment of instruments that include cello, double-bass, bells, viola, violin, and trumpet, as well as guitar, bass, and drums. Sixty minutes of music is produced, all of which demonstrates the members' distaste for convention. Boston's KAYO DOT is not out to make things easy for you. Rock and metal traditionalists beware, the group's second album, "Dowsing Anemone with Copper Tongue" is meant to pluck you out of your comfortable musical environs and teach you about mind expansion though long, unorthodox compositions and the creation of mood.

With five tracks that range from almost eight minutes to a whopping 18 minutes and arrangements that may mesmerize with peaceful ambience one moment and destabilize with chords crying out in pain the next, it's no wonder that "avant-garde" is the first description that's thrown out. "Dowsing Anemone…" is many things: tripped out and doomy metal, an experimental indie rock record, and artful noise. The one constant is its extremity and unpredictability. There is no road map for a tour through these songs, so it's best to just commence driving.

Those ringing riffs mentioned above are joined with chant-like vocals on "Gemini Becoming the Tripod", the first foray into the earth's nether regions. Gentle, yet chilling whispered vocals waft through the air on "Immortelle and Paper Caravelle" as a saxohone weeps. "Aura on an Asylum Wall" is my pick for highlight, as those RADIOHEAD-esque vocals continue, this time aided by echoing semi-screams and spirited sax playing that feels like traditional jazz (think a '60s era, dimly lit, smoky bar) joined by sweet trumpet sounds. Still, dark and foreboding tones are never far off, ultimately bringing to a close the song's soothing moments with a harsh ending made of motoring bass and screams. There is of course much more on offer here, including clanging chords, dissonant stretches, ethereal breaks, and subtle, yet emotive singing.

Unless you consider yourself an avant-garde metal aficionado, noise king, or ambient expert, a rating only counts for so much here. What it really comes down to is gut feeling. Does it move you in ways that cannot be described through song dissection or musical analysis? Personally, I found the album to be a fairly intriguing listen, one that at times kept me keenly interested and at others did little for me one way or the other. Translation: Feels like a 7.5