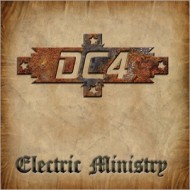 Inclusive of guitarist Rowan Robertson (ex-DIO),vocalist/guitarist Jeff Duncan (>ARMORED SAINT, ODIN),drummer Shawn Duncan (ODIN),and bassist Matt Duncan, one could say that Los Angeles' DC4 features a membership of some repute. On fourth album "Electric Ministry", the band gets the job done with only moderate frequency across 12 cuts of modern heavy metal that are given a boost with a slick Bill Metoyer production.

Some decent riffs, sizzling guitar solos, hard driving rhythms (including audible, active bass and a vocal style from Jeff Duncan that vaguely reminds of a smoother David Lee Roth (VAN HALEN) accompany songwriting that is usually a bit above average. The usual part is best represented by highlights "Wrecktory", the somewhat cheesy "XXX", an anthemic title track, and a standard metal driver called "25 to Life", one of several that are lightly shaded with '80s glam/hair metal. On "Glitter Girl" those shades turn more pronounced on a tepid chorus with harmonies reminiscent of VAN HALEN. The otherwise rugged "People" suffers from a middling refrain. Though likeable, the eight-minute "Broken Soul" falls a little short of delivering the epic goods. It is on irksomely sentimental power ballad "The Ballad of Rock and Roll" and acoustic/piano-based ballad "Dirty Hands", the former with violinist Juliette Primrose (Michael Flatley's Lord of the Dance) and both featuring keyboards from Dizzy Reed (GUNS N' ROSES),where solidity turns to dreck. The album would have benefitted from the exclusion of both songs. The album finishes strong though, thanks to the exotic melody line and fuel-injected engine of bonus track "Translucent Life".

"Electric Ministry" contains a fair amount of worthwhile metal bombast. Much of the material comes with hot guitar work and is powered by a taut 'n tough rhythm section, peppered with guest percussion performances from ARMORED SAINT's Gonzo. A handful of tracks boast sizeable hooks as well. The appeal of DC4 to a certain segment of the metal community is undeniable, but on the whole "Electric Ministry" lacks the kind of impact needed to make it a real keeper.