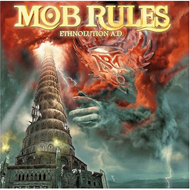 Remarkable consistency, great vocal lines, and a "less is more" approach to melodic power metal is what you get with Germany's MOB RULES. On this, their fifth album, they go the "half a concept album" route (most successfully done in recent years by RAGE) — lyrically, it's no great shakes, but the music will scratch the itch of anyone into power metal that's heavy on the AOR song structures and the trad-metal pomp.

Most of the work in a MOB RULES song is carried by the vocals and the keyboards. Vocally, these guys take a refreshing approach, allowing the singer's voice to be presented in a very organic way, without endless gloppy layers of choruses being added to every syllable. Though this means you can occasionally hear when he's straining for a note, the end result has a much more immediate and real sound to it than the computerized walls of angelic choirs that sometimes bog down their contemporaries. Any gloss lost on the singing is more than replaced by the keys, which often provide the instrumental hook for a song while the guitars crank out a relatively generic backing rhythm.

The overall effect can render some of the songs, especially the ones with similar tempo, a bit samey. But for every staid, dignified midtempo number like "Unholy War", you've got a relative barn-burner like "Fuel to the Fire" or "River of Pain", where the beat ratchets up slightly and the riffs come out front. Arguably the best cut is "The Last Farewell", the final chapter of the concept album-side, with its soaring chorus, synth strings and insistent beat. The only real misstep is the pacing of the album – ending with the relatively un-heavy "With Sparrows" (one of the lamest song titles of the year) and the schmaltzy ballad "Better Morning drags down the momentum and ends things on a somewhat saccharine note. The first nine cuts, though, are indisputably solid.

This is definitely a strain of metal that's pretty much for existing fans only — if you're not already buying into this midtempo marriage of AOR and power metal, with its relative stagnation of creativity but ever-increasing instrumental chops and song polishing prowess, you probably won't dig MOB RULES at all. Those who appreciate the more melodic side of life, though, should once again thank the dying remains of the record business for getting these sorts of releases worldwide distribution — after all, it wasn't that long ago that American fans woulda had to have shelled out $28 for a copy of a band like this on CD. MOB RULES have yet to release a definitive "must have" album, or transcend the genre they're so firmly rooted in, but they work the sound they have to its utmost, and acquit themselves well on "Ethnolution A.D".