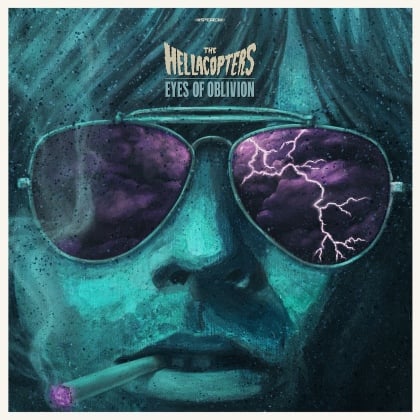 Everybody needs to have their spirits raised from time to time. THE HELLACOPTERS were always particularly good at such things, delivering seven soil-scorching albums between 1996's seminal "Supershitty to the Max!" and 2008's "Head Off" swansong, and nearly always sounding like the greatest, coolest and most celebratory rock 'n' roll band in the world. Founder and frontman Nicke Andersson has busied himself with all manner of projects since, not least the very nearly as good IMPERIAL STATE ELECTRIC, but the long-awaited return of his most successful band feels both necessary and extremely welcome. "Eyes Of Oblivion" is exactly what was needed, too: a balls-out hard rock record, ten songs deep, no messing about. Fourteen years have passed since they last released any new music, and the Swedes have clearly approached this comeback with the care and attention to detail that it deserves.

Not that any of this is rocket science, of course. THE HELLACOPTERS always excelled when they gave mischievous nods towards the past, while frequently serving up songs of equal quality to the ones they were saluting. That remains true on "Eyes Of Oblivion", the only difference being that this feels crafted and coherent in a way that none of the previous albums were. The opening brace of "Reap A Hurricane" and "Can It Wait" are the high-energy money shots that diehard fans will have been waiting for, but instead of rattling along at the same pace, Andersson's crew switch to lavish, bluesy, soul rock grandeur for swaggering ballad "So Sorry I Could Die", sounding utterly at home with the conceit. The title track follows, and it's an instant classic: an effervescent guitar hook welded to a gleaming chassis of muscular power-pop, it's almost BOSTON-like in its audacious catchiness. "A Plow And A Doctor" and "Positively Not Knowing" keep the fires burning, the latter at a tooth-dislodging punk rock tempo, but it's the goofed-out glam rock of "Tin Foil Soldier" that leaps out as this record's most unapologetic moment of fun. Like the bastard child of T. REX and CHEAP TRICK, it's almost lethally upbeat and would surely have been a monster hit had it been released 40 years ago. Frankly, it still deserves to be now.

Sealing the deal with the laidback, shuffling "Beguiled", the strident radio rock of "The Pressure's On" and the final, spiky barroom brawl of "Try Me Tonight", THE HELLACOPTERS make it all sound like the most natural thing in the world — a timeless, joyous blast of unpretentious, overdriven snot 'n' soul. It's like they never went away.