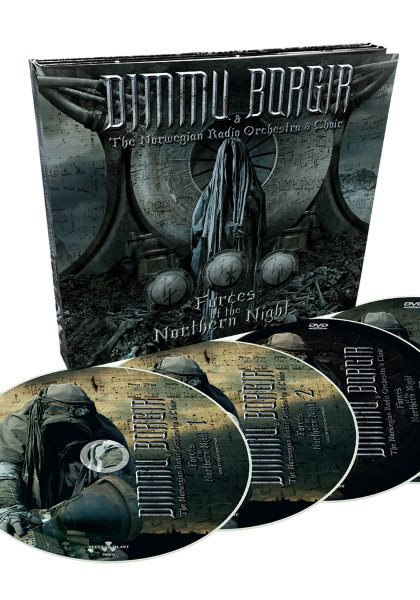 Forces of the Northern Night

One can only imagine what EMPEROR, accompanied by a full orchestra, might have sounded like, if the final album, "Prometheus: The Discipline of Fire & Demise", had been given over to such a prospect. Of course, metal and orchestral stage presentations have become passé, with black metal, as of 2011, representing the final. When mastered proficiently, the blazing velocity of guitars in black metal can produce a symphonic-replicated din, thus, the argument for mating the two has always existed.

Why it took until 2011 for someone to merge black metal with a symphony is relegated for debate, and how pedants feel about what is likely constituted as a commercializing of their arcane sanctity is open for discussion. If this vast task of further breaking black metal out wasn't to fall upon BEHEMOTH, ENSLAVED or KEEP OF KALESSIN, why not the subgenre's poster child: DIMMU BORGIR?

While the band puts the final twists to its long-processed ninth album, we get "Forces of the Northern Night". This package is a double DVD and CD DIMMU BORGIR presentation performing with KORK, the Norwegian Radio Orchestra, and the Schola Cantorum Choir, the latter having recorded on 2010's "Abrahadabra". If you can believe it, the performance captured at Oslo Spektrum was broadcast on Norwegian television as part of a one-hour documentary. Hell obviously froze beneath Norway.

Perhaps only The Great Kat can outduel this shred-tastic neoclassical hell storm that DIMMU BORGIR and its symphonic elements conjured. Presenting the same set list on both "Forces of the Northern Night" at Oslo Spektrum, and "Northern Forces Over Wacken" (with the National Czech Symphonic Orchestra),both performances presented in this package, the primary difference between the two performances is forum. For aesthetic purposes, the outdoor Wacken show is the more visually appealing set, though both are undulating clamor with a smidge more echo to the Oslo gig. A Wacken fest mosher wearing an oversized monkey head during "A Jewel Traced Through Coal" is a freaking riot, even if black metal purists are unlikely to be amused.

Nor are they apt to be pleased with random members of the orchestra bearing slashes of ghoul paint, much less Shagrath's routine accolade-summoning of the crowds. Such is the way when you're the biggest thing in your genre. Shagrath leads the rest of the ashen-clad band, cloaked by skeletal and snakeskin pattern sleeveless trench coats and undead face paint, contrast to the tuxedo-clad ensemble behind the band. DIMMU BORGIR is naturally twenty times heavier and faster than METALLICA or the SCORPIONS, both of whom successfully played the orchestral rock card. "Forces of the Northern Night" proves how much DIMMU BORGIR outclasses them—even EPICA, who put on one of the most masterful orchestral couplings in metal history, 2009's "The Classical Conspiracy".

It's compelling to watch KORK impressively keep up with the flailing speed of "Born Treacherous", "Vredesbyrd" and "Chess with the Abyss", the orchestra's horns and flutes decorate the chaos with shrill note scales. The string section meanwhile supplements the gales and slices garishly across the breakdowns. The intro to "Gateways" is sensuous with the black-robed Schola Cantorum Choir chanting sedately before the calamitous thunder greeting its wake. Agnete Kjolsrud from DJREV, looking like Live Wire from Superman gone black metal, reprises her vocal contributions to "Gateways" onstage.

"Progenies of the Great Apocalypse" was written with a spectacle of this nature in mind, and DIMMU BORGIR and KORK elevate it so far that members of the orchestra waiting to join back in vigorously bob their heads in anticipation. It is a climactic point of the set, where the entire collective of musicians summon energizing power to sustain them through "The Serpentine Offering", "Kings of the Carnival Creation" and so on. The orchestra sweeps gallantly, at times summoning echoes of composer Basil Poledouris, through the breathtaking instrumentals: "Xibir", "Dimmu Borgir""Eradication Instincts Defined", "Fear and Wonder", and "Perfection Or Vanity". It is thus a perfectly realized collaboration where KORK and Schola Cantorum are equal stars to DIMMU BORGIR.

Only Danny Elfman, composing a black metal opera, would be equal to this.