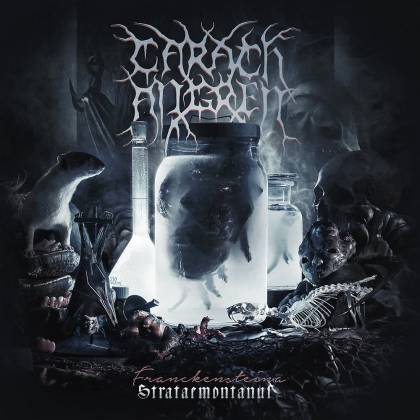 One of metal's greatest strengths is the its ability to transport the listener to alien worlds, fantastical dimensions or maybe just somewhere less shit than here. Bands that construct a convincing conceptual and thematic world are not exactly uncommon in metal, of course, but CARACH ANGREN have put a particularly impressive amount of energy into their gruesome but wildly theatrical take on melodic black metal. While certainly owing a reasonable debt to CRADLE OF FILTH, the Dutch eccentrics have long since established their own, strong identity, and sixth album "Franckensteina Strataemontanus" feels like a very clear and belligerent demonstration of how sophisticated that identity has become.

Admittedly, this is rampaging, gonzoid entertainment, too. More shlock than shock, these deceptively intricate songs flesh out a core narrative recounting a new, mutant variant of the Frankenstein story, with all the ghoulish flair and symphonic bluster that such endeavors demand. There are some fiendishly catchy songs here: "Monster", the first single, is more ALICE COOPER and LORDI than anything more malevolent, but it fits perfectly, nonetheless. "Sewn For Solitude" ticks a lot of melodi-black boxes, but its underlying drama and dynamism lifts it into the realms of perfection. The title track, meanwhile, wears its late '90s industrial-rock influences with pride, sounding like a cross between TYPE O NEGATIVE, PRONG and NAILBOMB. This, incidentally, is a very good thing indeed.

Beyond the theatrical money shots, "Franckensteina…" is an album that highlights how finessed CARACH ANGREN's musical world has become over the last 12 years. The eight-minute sprawl of "Like A Conscious Parasite I Roam" must surely be the band's finest moment to date: a gloriously overblown mini-opera with orchestral trimmings, its sole downside is the fact that we can't currently watch this stuff unfolding on a stage. Likewise, "Operation Compass" is a wonderfully ornate and crafted thing, dripping with vampiric romance but still legitimately heavy and laced with spite, as thuggish blastbeats and yawping tubas propel this album's twisted tale forwards.

Black metal purists will probably flinch from this band's overt stylishness and taste for the vivid colors of widescreen horror, but that never stopped lots of other bands from being hugely successful. CARACH ANGREN are playing to the ghoulish gallery, but it'll be standing room only soon enough.