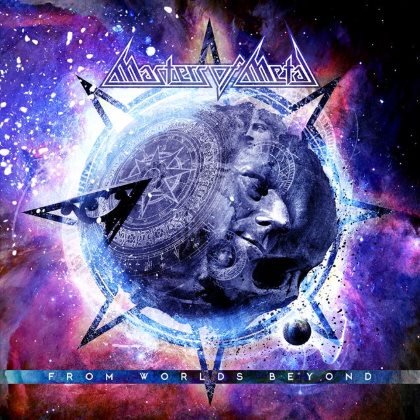 Showtime has "Masters of Horror" and "Masters of Sex". Heavy music has MASTERS OF METAL. Without making too light of things, the side project of AGENT STEEL members Robert Cardenas, Bernie Versailles, Rigo Amezcua and Juan Garcia has whipped up a buzz in the underground. Fans have been anxiously awaiting the release of MASTERS OF METAL's full-length debut "From Worlds Beyond" following their 2013 self-titled EP.

The MASTERS OF METAL album comes to us with cameos by HELSTAR chums James Rivera, who has sung here before, and Larry Barragan. As with AGENT STEEL, MASTERS OF METAL is a thrash and power metal amalgam with oodles of harmony and, in this case, heads upraised toward the stars.

"Supremacy" is a speed-freak opener, but it's cooler than the norm with "whoa-oh" vocal rises and swirling guitar solos that carry the song to the album's titular outer realm. Ditto for the celestial guitar intro for "World Left In Cinders". The song settles into a hammering mosher guided by Robert Cardenas's bulky bass twirls and Rigo Amezcua's double kicks.

As the theme to "From Worlds Beyond" is obvious, Juan Garcia and Bernie Versailles's guitars are top-to-bottom stellar with each shred and solo, even on slower numbers like "Third Eye", "The Mindless", "M.K. Ultra" and "Eclipse". "Eclipse" is the album's coolest non-thrasher with its power pumps and bass-guided note climbing. "The Mindless" features some of the sickest riffs and juiciest solos on the entire album. Robert Cardenas owns the bass-drunk "M.K. Ultra", but the extracurricular six-string scales are wicked in their own right.

"Into the Vortex" is another slower cut (with a cool pickup along the way),but there's an early years ANTHRAX kick to the riffs that gives the song a bigger grab than it might not have had without it. The longer and slower "Doors Beyond Our Galaxy" starts off well but timing issues derail it, and the acoustic rhythm is drowned out, barely peeking into the track.

The faster numbers come sporadically in the way of "Supremacy", "Tomb Of Ra", "Evolution Of Being" and "Vengeance & Might", the latter with James Rivera helping to chomp out a rather silly "Masters of Metal" rally chant. The vocal mix is a bit lax on "Vengeance & Might", and the production of the song seems thinner than the rest of the album. However, the twin guitar flickers make up for the song's deficiencies.

As "From Worlds Beyond" was nearing completion, Bernie Versailles suffered a coma inducing brain injury. As we wish him a healthy recovery, MASTERS OF METAL will be sure to strike the right note with AGENT STEEL fans. Though it's far from perfect, "From Worlds Beyond" yields a lot of audile gold to mine through.