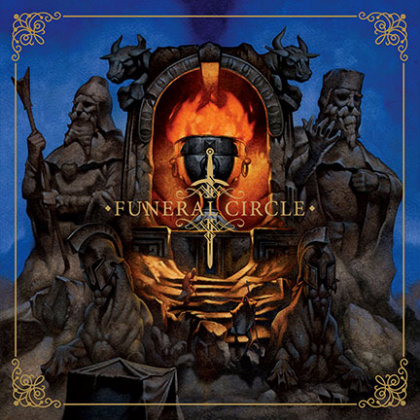 Canadian doom sect FUNERAL CIRCLE are a well-read bunch who weave creeping, elegiac dirges featuring dark fantasy and arcane muses. The Necronomicon, Paganism, Lovecraft's sinister realm of Cthulhu and Conan the Barbarian's duke-outs against the snake cult of Set all figure into FUNERAL CIRCLE's brand of "epic doom metal." This, as opposed to regular ol' doom metal, supposedly. True to their word, though, count on plenty of "epic" with this band.

FUNERAL CIRCLE has spent as much time consuming CANDLEMASS, PENTAGRAM, CIRITH UNGOL and GRAND MAGUS as they have occult literature and pulp novels. While Jeremy Hannigan's tormented swills appear to still be in their refinement stages, the other two components of FUNERAL CIRCLE, Matthew Barzegar and Steven Mulleady, carry the lumbering weight of the band's music, which accelerates past two miles an hour only in spots, i.e. in later segments of "Black Colossus" and "Obelisk". Barzegar plays electric guitar while Mulleady adds supplemental electric and acoustic guitars along with bass, keys and drums.

FUNERAL CIRCLE's biggest attribute is their encapsulating guitars, shining from the commonplace conventionalism of doom metal, which these guys are obliged to honor. Structurally, there's not much to this album you haven't already been privy to on a doom record, but Barzegar and Mulleady's reeling swirls that ring atop the clambering plods of FUNERAL CIRCLE's compositions are fantastic. The explorative, wailing tag solo opening "Scion of Infinity" sets up the song's unhurried grind. The longer the song winds on, expect Barzegar and Mulleady to return with an extensive series of traded and ultimately morphed solos.

Containing their work to a largely ponderous pace, the sonic-bled layers FUNERAL CIRCLE stacks into the 8:48 "Corpus of Dark Sorcery" not only add malevolent consistencies, they elevate the mysticism of the song's primary whispery feel. The sweaty final sections and screeching outro to the 11:35 "Obelisk" are magnificent, while the articulate though bleak acoustic guitar and echoing keys on "Tempus Edax Rerum" create one of the more stylish points to the album. The same lucid sway is carried into the intro of the quick-to-be-ugly, sluggish clout of the 9:22 "The Charnel God".

Jeremy Hannigan tries to be entrancing in his delivery, but there's too much shakiness in his effort to stray from monotone. His vocal patterns slowly rise and fall in routine patterns, but stand prepared for him to peel off a few unnerving falsettos throughout the album, along with a demon growl in the beginning of "The Charnel God". Hannigan doesn't extend himself too far otherwise, yet his tones could use some polishing in order to keep up with FUNERAL CIRCLE's expressive guitars.

In all, a pretty stout offering with attractive guitar work frequently stretching beyond the anticipated low-end chords and timeworn doom scripts. Matthew Barzegar and Steven Mulleady load their distortion with fragility as well as heftiness. When they have vocals to stand tall with them, FUNERAL CIRCLE will emerge as a potential force.