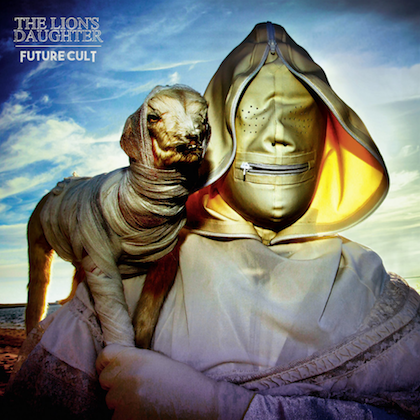 The history of heavy metal is peppered with instances of bands whose careers truly launched only after making a hard pivot stylistically. JUDAS PRIEST and ACCEPT started off as competent rock-and-rollers before embracing metallic power and speed. DARKTHRONE's earliest output was expertly executed death metal, but it was the band's embrace of black metal noise that cemented it as a genre pioneer. It is obviously too early to tell if the gamble made by THE LION'S DAUGHTER on its latest record, "Future Cult", will send it on a similar trajectory. But the eccentricities of the newest course the group has charted do make for one of the most engaging records of the year.

The first decade of THE LION'S DAUGHTER's existence was spent generating a caustic blend of hardcore-tinted doom metal, embellished by flirtations with black metal pummeling and post-metal atmospherics. These elements are still present on the band's fourth record, "Future Cult". The hard pivot on this record is the St. Louis trio's embrace of synthesizers to mutate its existing sound into an almost completely different beast. Though BRUCE DICKINSON once famously quipped that "you can't make heavy metal with synthesizers," the instrument has become more accepted in recent years, thanks to modern synthwave acts such as PERTURBATOR and GOST, which market themselves with heavy metal imagery, and horror film-score composers JOHN CARPENTER and GOBLIN performing their most beloved orchestrations live.

Where THE LION'S DAUGHTER's integration of the instrument becomes exciting is that "Future Cult" is still very much a decidedly metal record. There may now be keyboards and synthesizers, but this is not a prog-metal album. Vocalist/guitarist Rick Giordano assumes triple duty by layering in keyboards that very much evoke the soundtracks of 1980s horror and sci-fi classics, while the band's compositions are still underpinned by the metallic mix that the trio has refined throughout its decade-long existence. The opening title track sets the tone by featuring Giordano's abrasive barks at the forefront of a mix of SLAYER riffs and pulsating synths, and the remainder of the album's thirty-six minutes continues the impressive juggling act.

Second track, "Call the Midnight Animal", begins with a haunting slow-burning synth groove before launching into blastbeats and a black metal bludgeoning evocative of "Assassins"-era NACHTMYSTIUM, before it climaxes into a mid-tempo mechanized attack that would have been at home on a mid-'90s Wax Trax! industrial-metal release. "Die into Us" begins with similarly haunting keys before showcasing the tribal drum attack of Erik Ramsier, then veering into a danceable synth breakdown that is enhanced by shred guitar. Guitarist/bassist Scott Fogelbach is dexterous on tracks such as "Grease Infant", which features perhaps the heaviest post-metal influence of the record, though even then the ascension of the backing synth accompaniment from a downtuned low-end plod to a pulsating dance-beat-laden jam-out is a welcome reminder that "Future Cult" is a mutant of a record.

The risk of overindulgence is always high when bands attempt to integrate newer musical influences into an existing blueprint. THE LION'S DAUGHTER avoids the pitfalls of experimentation thanks to its care in keeping each individual track to a concise three-to-four-minute blast. There is very little waste or sprawl on "Future Cult", with the album being a very breezy listen, never allowing the listener to get overpowered or numbed by the dizzying instrumentation on display.

Whether commercial success comes for THE LION'S DAUGHTER with its latest musical endeavor, after a single listen to "Future Cult", one cannot deny that the gamble has paid off creatively. Though after hearing how well the new instrumentation was integrated, it's hard to imagine them going back to an existence where synthesizers do not play a prominent part in the band's sound.