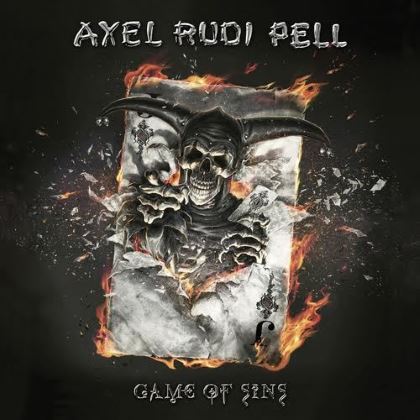 Axel Rudi Pell is a power metal engine that can and can some more. Celebrating 25 years as a solo artist in 2014, the former STEELER guitarist dropped a three-disc live commemoration, "Magic Moments: 25th Anniversary Special Show", in early 2015. Now boasting a remarkable 17 original studio albums, four ballad compilations and a handful of live recordings stacked within a quarter century, Axel Rudi Pell is a quantifiable metal hero. That being said, his latest offering, "Game of Sins", has the right intentions but sadly, not a lot of starch. It's not a bad album, but it is evident Axel went through the motions in a haste to drop new product on the heels of his gleaming streak.

Leading off with a twisted oom-pah and organ-smashed instrumental, "Lenta Fortuna", the album then kicks out the trad metal piece, "Fire". Lyrically announcing the rise of Lucifer and the downfall of a morally bankrupt world, the song is merely okay; a prototype power cut with barely enough thrust. Thereafter, "Sons in the Night" picks up the pace a smidge, given bigger clout thanks to Bobby Rondinelli, who nearly owns this album. Stuffing all the typical metal idioms as the choruses can withstand (i.e. "restless and wild," "never surrender" and "ready to fight"),"Sons in the Night" is a fan pleaser with staple power chords and Axel's gnarly guitar wizardry.

The title track is one of three marathons the others being "Forever Free" and "Till the World Says Goodbye". As he's done many times before, Axel Rudi Pell toasts Ronnie James Dio on "Game of Sins", right down to the archetype slow march and windswept choruses. Though Johnny Gioeli doesn't try to mimic Dio by pitch, he emulates the latter in the extensive carrying of his notes. Bobby Rondinelli pounds the crap out of of "Falling Star", another song tipping its hat to Dio. The slogging trudge of "Till the World Says Goodbye", another would-be Dio epic, sports a terrific, emotive guitar solo. If there's one song that likely changed the course of Axel's career, it has to be "Egypt (The Chains Are On)". Does "Forever Free" take the same cue? Hey, did RJD look through the light to find a sacred heart?

As with much of "Game of Sins", the ballad "Lost in Love" is played to standard, minus a tasty violin that dresses it up nicely. "The King of Fools" is dialed back in rhythm and could use a hair more urgency, albeit it does boast the album's best set of melodies. The bonus track to "Game of Sins" is a cover of Bob Dylan's "All Along the Watchtower" as strangled and rattled by Jimi Hendrix, though bearing a new arrangement to the intro. Really, the only reason to listen to this version is to hear Axel flail away, which he does delightfully.

While all the parts are played as tightly as ever, there's a thin sound to the production that hurts "Game of Sins". Ferdy Doernberg's keys are often globby and to be frank, the album simply has its foot off the gas more than on it. Bobby Rondinelli being a spectacular exception, "Game of Sins" is pedestrian stuff. Axel Rudi Pell is perhaps guilty of trying to hurriedly capitalize upon the momentum of his silver anniversary, and fans know that he is more than capable of delivering entertaining power metal records after doing it longer than many. This one, unfortunately, is bare minimum.