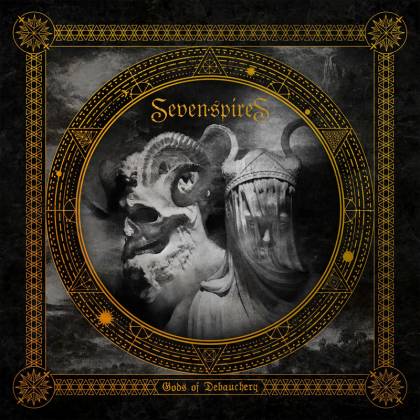 Audacious. That's the only word for it. As virtually every band on the planet threw themselves into a lockdown-facilitated and wholly newfound world of unfettered creativity last year, we can be secure in the knowledge that there will be a lot of big records over the coming months. But very few of them will be as audacious, or indeed as good, as "Gods Of Debauchery".

SEVEN SPIRES have form, of course. Barely 18 months ago, the Boston-based quartet released their second album, "Emerald Seas". It was an absolute tour-de-force of wildly imaginative symphonic, power and extreme metal, and would almost certainly have grabbed a lot more attention had the world not immediately disappeared up an unavoidable pandemic shit-chute. Somehow, "Gods Of Debauchery" not only repeats the brilliance of its predecessor, but expands upon it and paints the results in increasingly vivid and vital colors. To think that SEVEN SPIRES diligently knocked this 77-minute behemoth together, rather than bemoaning their lot as non-touring potential world beaters, says it all about the levels of conviction and creativity at play here.

Once again, this band skillfully side-step all the usual genre pigeonholing, instead preferring to do as much of everything as possible, albeit all within certain aesthetic guidelines. If that makes "Gods Of Debauchery" sound calculated, do not panic: this is simply a detailed, meticulous piece of work that dares to demand more from so-called modern melodic metal than the competent appeasement of an unimaginative fan base. SEVEN SPIRES are really pushing things here, ignoring any supposed barriers between, say, the kaleidoscopic grandeur of bands like KAMELOT and AVANTASIA, and CRADLE OF FILTH's macabre, quasi-cinematic sound-world. As ever, vocalist Adrienne Cowan is so absurdly versatile that it makes zero difference whether her band are bringing the blackened death hammer down (as they do on scintillating single "The Cursed Muse") or languishing in crestfallen ignominy on grandiose ballads like "The Unforgotten Name", everything here makes perfect sense and adds substance to the overwhelming might of the whole, multifarious caboodle.

The scope of this thing is ludicrous, and yet "Gods Of Debauchery" never hurdles the shark. Underpinned by some labyrinthine narrative that may well reveal itself over repeated listenings, it casually mirrors the artistic hugeness of DREAM THEATER's greatest concept works, while still exhibiting a clear affinity with modern metal's hooks, heaviness and flamboyant excesses. But while it is clearly intended to be consumed in one reality-blitzing hit, "Gods Of Debauchery" works as a dazzling showcase for SEVEN SPIRES' eerily refined songwriting abilities.

The best moments (on an album that never dips for a dead second) are simply great heavy metal songs: sometimes wildly elaborate and theatrical heavy metal songs, but always armed with melody as their most effective weapon. From the infectious, pop-metal sizzle of "Lightbringer" to the monolithic, dark metal symphony of "This God Is Dead", these annoyingly gifted young musicians have done it again. "Gods Of Debauchery" is audacious, ante-raising and bereft of comparable competition in 2021.