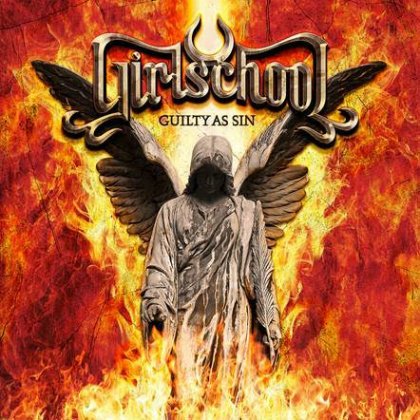 It's been seven years since GIRLSCHOOL dropped their last full-length, "Legacy", notwithstanding the 2011 redux "Hit and Run – Revisited". If you care about deafening, roughneck rock ‘n' roll, you've been missing these ladies. GIRLSCHOOL has long held the torch, not only for breaking barriers, but for decibel-driven rock that you still have to be from the old school to push like you have a pair—figuratively-speaking, of course. Their latest work, "Guilty as Sin", is banging, raw and a ton of fun. As bassist/vocalist Enid Williams puts it, "It's very much a classic rock album, but covering a whole…almost a history of rock music that we've loved, really."

The album opens with the anthem "Come the Revolution", pushing out blaring guitars and bass, and a rolling rhythm from Denise Dufort, who lays down some wicked double hammer on the tail ends of the verses and choruses. The ladies gang sing the choruses loud and proud, and really, the only itch about the number is a seemingly unintentional tempo spike toward the end that's off-kilter. Otherwise, it's a solid number picked up by the fast and rowdy "Take it Like a Band". The cleverly titled speed jam is MOTÖRHEAD all over (you weren't expecting otherwise, were you?) and it rips, right down to Jackie Chambers's jerked-out solos. Later in the album is another speed demon, "Night Before", with terrific call-and-response singing and brash shredding.

The title track keeps the pace pumping at a blues rock swagger while the slow ‘n' dirty "Awkward Position" drops the pace and throws out pop-driven verses. GIRLSCHOOL jacks up the choruses on "Awkward Position" with blaring chords, lazy bass, swampy guitar lines and prickly singing you can't help but dig.

If "Take it Like a Band" is one of GIRLSCHOOL's trademark potshots against misogyny, consider their leathery cover of the BEE GEES's disco staple "Staying Alive" and their modification of the opening line to ring, "Well, you can tell by the way I use my walk, I'm a woman…no time to talk." The cover itself is pretty cool, given the dirty riffs, spit-slung verses and anti-dance rhythm GIRLSCHOOL dumps into it.

This being quite a dynamic album, the peppy vigor of "Perfect Storm" is one of the album's catchiest numbers, and is not far off from SHONEN KNIFE. Yet the heavy strumming and throbbing beat, which give this song its throb, are poked by a couple of cagy breakdowns. Wildly, GIRLSCHOOL ends this record by whipping out a party-upped cover of a Nigerian folk song popularized by Pete Seeger, THE WEAVERS, and more, "Everybody Loves (Saturday Night) ".

Kim McAuliffe, Jackie Chambers and Enid Williams bring more thunder than usual to "Guilty as Sin" while Denise Dufort slams beats with a delicious echo to her snare strikes. The production of the album is intentionally grimy, but it also captures GIRLSCHOOL's volume, proving a long overdue point: this band has long held its own against any hard act, be it MOTÖRHEAD or THE RUNAWAYS. While "Legacy" was a respectable slab, "Guilty as Sin" surpasses it, showing there's a ton of gas in this band's tank.