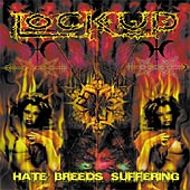 Call me jaded, but the idea of four guys getting together with the sole purpose of making the “most extreme” old-school-style grindcore CD ever released is a concept that leaves me cold, and with good reason. Over the course of the last fifteen years, many acts have attempted to offer their own version of “most brutal album to ever see the light of day”, and most have only succeeded in creating a surefire cure for insomnia, never to be heard from again.

Consisting of NAPALM DEATH bassist Shane Embury, NAPALM DEATH guitarist Jesse Pintado, former AT THE GATES/current THE CROWN frontman Tomas Lindberg, and DIMMU BORGIR drummer Nick Barker, LOCKUP are essentially a modern-day answer to Pintado's former group TERRORIZER, whose 1989 World Downfall release served as a blueprint for this kind of stuff and which remains a genuine classic to this day. The trouble is, LOCKUP have done almost nothing to update the sound and modernize it in a way that would give it the kind of dynamics that are sorely needed to make an album of this nature listenable to anyone but the most ardent of grindcore-heads.

As one could expect, there are plenty of drum-blast beats and death metal-style riffing that hark back to virtually every period of NAPALM DEATH's career—a consequence, no doubt, of Embury's significant involvement on the songwriting side. In fact, much of this material could easily pass as leftovers from the British outfit's more primitive, Barney-era offerings, with nary a trace of the noisy, experimental leanings that made the group's later releases that much more enjoyable (at least as far as this writer is concerned).

It's all delivered convincingly enough, and Lindberg's vocals—while lacking the raw edge that made them such a highlight on AT THE GATES' brilliant Slaughter Of The Soul opus—are probably a bit more tolerable than the dull death metal-style growls of his predecessor, HYPORCRISY's Peter Tagtgren (who sang on LOCKUP's 1999 debut, Pleasure Paves Sewers). When all is said and done, however, LOCKUP have succeeded in making the kind of album that will be remembered more for its contrived extremity than the quality of its tunes, and in light of the bandmembers' collective accomplishments, it is one that will be viewed as a disappointment of epic proportions.