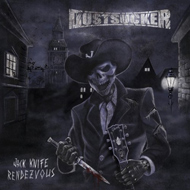 Dunderheaded German metal with a clunky punk attack, like a more low-rent version of the first MAIDEN record, complete with endearingly off-key vocals, rudimentary twin leads and titles like "Bleed For My Strings" and "Witch of Death" to ensure maximum metal cliché goofiness. The end result is somewhere in between MOTORHEAD's dirty boogie, the earnest banner-waving of RUNNING WILD and the raucous noise of a hundred forgotten punk/metal acts, from ROGUE MALE to THE SPUDMONSTERS.

It's not the most essential must-have album that'll ever hit your stereo, but damned if it isn't a good time — there's something basically appealing about bands like these, even as you're tempted to pick them apart for being unoriginal and inconsequential. When they do things like throw in a song-ending key change in "Dust Is Rising" — a classic power-metal move — but then the singer can barely pull off the new key in his hale and hearty bellow, it gives the band a certain roughshod charisma that many more technically proficient bands can't muster. Their lack of adhesion to any one ideology makes them a refreshing listen, too — is it punk? Is it metal? It's the sound of some mates making a lot of noise over too many pints, and that's all it needs to be.

"Jack Knife Rendezvous" is a simplistic, head-down charger from start to finish, making up in energy and spunk what it lacks in polish or virtuoso performance. Its rough-and-ready nature recalls any number of vinyl-only bands from the 80's, when metal with hard rock and punk influences and a leather-lunged singer could just be called "metal" without a million qualifiers, and when giving it your all still counted for something. DUSTSUCKER aren't a terribly important band in the grand scheme of things, but they make music that's a helluva lot of beer-drinking, skirt-chasing fun.