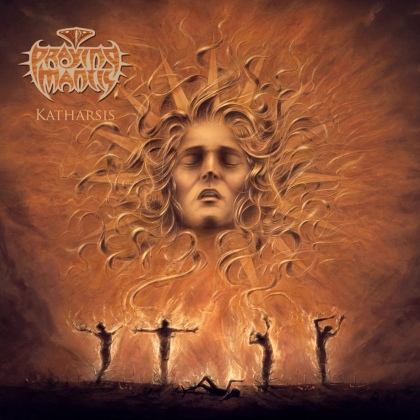 So much has been written about the enduring influence of the New Wave Of British Heavy Metal over the decades that it's easy to forget that only a few of its bands achieved any significant success. PRAYING MANTIS were never afforded the fortune or opportunities that came the way of the movement's big names, and neither were they allowed the retrospective credibility latterly afforded to the more influential likes of ANGEL WITCH and VENOM. Instead, the Londoners took a singular approach, infusing their sound with more melody, harmony and prog-tinged pomp than any of their contemporaries, and casually pre-empting the hook-worshipping AOR and melodic rock movements that followed as the '80s progressed. If it's a classic NWOBHM album you want, then 1981's "Time Tells No Lies" is always a solid choice.

Occasional hiatuses notwithstanding, PRAYING MANTIS have been more persistent than most of their peers in recent times. "Katharsis" is the fourth studio album since the band reunited (again) in 2008, and much like 2018's "Gravity", these songs eschew misty-eyed nostalgia in favor of a timeless, classic rock sound and songs with self-evident crowd-pleasing potential. Both "Cry For The Nations" and "Closer To Heaven" have that burly, UFO-like toughness going on, but "Sacrifice" is a likeable, cheerfully overwrought ballad; "Wheels In Motion" will sound glorious coming out of a car radio at sundown; "Masquerade" is all MAGNUM pomp and lovelorn resignation; "Don't Call Us Now" is an infectious pop-rock shuffle, with the album's strongest chorus and faint echoes of rock opera andJETHRO TULL.

All of the above confirm that PRAYING MANTIS excel when they think outside the box, however briefly. The downside to "Katharsis" is that songs like "Ain't No Rock 'N' Roll In Heaven" and "Long Time Coming" are so straightforward and prosaic that they pale in comparison with the album's deeper cuts. There is nothing wrong with simple, fun hard rock songs, of course, but there are smarter ways to state the obvious. Nonetheless, at its best, "Katharsis" tells of a veteran band with plenty of gas in the tank and a strong grip on their highly distinctive identity.