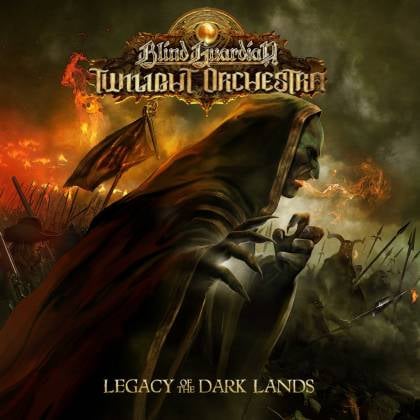 Legacy Of The Dark Lands

The seeds of the incredibly ambitious BLIND GUARDIAN TWILIGHT ORCHESTRA project were planted back in the nineties. Singer Hansi Kürsch and guitarist André Olbrich, core members of the extravagant and decadent German power metal outfit BLIND GUARDIAN, spurred forward the goal for them to craft an elaborate orchestral album since they were at that time already utilizing orchestral elements to flesh-out their rich and layered heavy metal sound. More recently, the grand effort and concept finally began to come to fruition as the lyrical backdrop, one that matches the grandiosity of the musical core, began to take shape with Kürsch and Olbrich working alongside bestselling German author Markus Heitz. The novelist's latest effort — "Die dunklen Lande", which was released earlier this year — is set to a narrative that takes place in the 1600s. This book is essentially the prequel to the tale that's behind "Legacy Of The Dark Lands", an opus that was crafted by BLIND GUARDIAN TWILIGHT ORCHESTRA, which is an entity that is essentially the marriage between BLIND GUARDIAN and the Prague Philharmonic Orchestra.

Heitz and BLIND GUARDIAN converged to synthesize their perspectives of the tale of one mercenary named Nicolas who was deeply entrenched in the Thirty Years' War. The acclaimed author initiates the story with his book, while the speed metal legends BLIND GUARDIAN pick up the baton with "Legacy Of The Dark Lands". In terms of storyline, the passionate and very human perspective of Nicolas unfolds. On the musical side, Kürsch, Olbrich and crew realize their potential to reach the lofty goal by successfully harnessing bold, classical orchestral arrangements alongside booming, theatrical choral vocals.

It's important to note that while BLIND GUARDIAN has historically incorporated orchestral elements within their symphonic heavy metal template, "Legacy Of The Dark Lands" is purely an orchestral album. It's one that Kürsch and company spearheaded with the assistance of the aforementioned orchestra. "Legacy Of The Dark Lands" is simply awesome. It's definitely one of BLIND GUARDIAN's best releases in decades.

"Legacy of the Dark Lands" is a marathon, a cinematic heavy metal event, of sorts. The epic release clocks in at about 75 minutes, divided into 11 songs. It is augmented with 12 voice acted intros. It's a monstrous affair that doesn't provide immediate impact, but for those who can totally immerse themselves in the album, the rewards are considerable. While some metal bands, even ones that are quite talented, awkwardly slap interludes upon the proceedings in a lazy effort to diversify the musical experience, BLIND GUARDIAN utilizes the short spoken-word moments with a sense of purpose and impact. They are integral to the captivating nature of "Legacy Of The Dark Lands".

The release opens with "1618 Ouverture", a dramatic number that exudes a dreary yet biting sense of drama. The immense talents of Kürsch shine bright throughout, yet most saliently on "Dark Cloud's Rising" with a relatively more impassioned and unhinged delivery. The gentlemen behind BLIND GUARDIAN truly wield the collective musicians' capabilities on this track in achieving highly evocative moments built upon grandiose orchestral structure. "Point of No Return" is an elaborate and layered dose of heavy metal glory, and "Harvester Of Souls" begins with an eerie quality that weaves in-and-out of the track that feels like a movie unto itself.

In a nutshell, "Legacy Of The Dark Lands" is what you would expect to hear as the score to a flick written by BLIND GUARDIAN. It's incredible because it bridges the thin divide between epic heavy metal and classical music in terms of spirit and essence. It's the world class symphony orchestra version of "Nightfall in Middle-Earth". "Legacy Of The Dark Lands" is one of BLIND GUARDIAN's best efforts. One can only hope for more BLIND GUARDIAN TWILIGHT ORCHESTRA material to come.