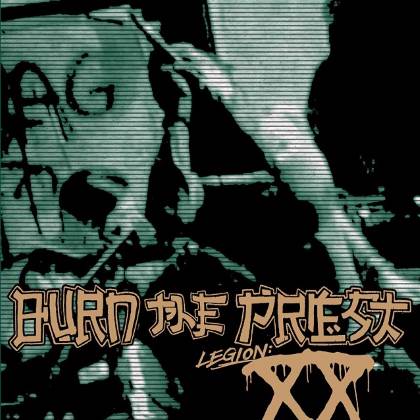 LAMB OF GOD has nothing to prove. The hard-working Richmond, Virginia-based band has earned its place among the top tier of metal bands globally. Now, the five-time Grammy nominated act returns with a full-length covers album, "Legion: XX", as a celebratory effort to mark the upcoming 20th anniversary of "Burn The Priest", the unit's debut album that was released under the moniker BURN THE PRIEST before its name change. Most importantly, "Burn The Priest" isn't simply for completists, nor is it a cash-grab. It's an energetic aural beating that pays tribute to the classic punk, hardcore and crossover bands that inspired LAMB OF GOD in the early days.

The thrashing groove metal band's humble origins can be traced to its days as college students at Virginia Commonwealth University where the members initially met. Banding together in 1994, they met a line cook less than a year later who would become the group's vocalist, none other than Randy Blythe. "Legion: XX", released under the band's original moniker, is a collection of classics that remain true to the originals encapsulated by the distinct, gritty musical flesh that uniquely belongs to LAMB OF GOD. While the release could have benefited by some reinterpretation of the source material, the ensemble hits a home run because of the conviction with which the songs were obviously performed.

The passion with which the renditions are performed is undeniable. BURN THE PRIEST delivers genre staples with an almost childlike sense of enthusiasm that we can imagine the group had when first discovering the covered bands and songs decades ago. It revives classics from the likes of S.O.D., MINISTRY, MELVINS, AGNOSTIC FRONT and BAD BRAINS. In doing so, BURN THE PRIEST may be profoundly introducing a new generation to powerful, ground-breaking heavy music in the same way that SLAYER did with "Undisputed Attitude" and that METALLICA did with its "Garage Days" releases.

BURN THE PRIEST goes straight for the throat with THE ACCÜSED's "Inherit the Earth" and doesn't let up from that opening song onward. Its take on S.O.D. 's "Kill Yourself" is delivered with the subtlety of a freight train. And the musicians' dynamic influences and capabilities are evident on a track like "Dine Alone", originally penned by melodic post-hardcore outfit QUICKSAND, and on BAD BRAINS's singularly styled hardcore punk charger "I Against I", a song that highlights Blythe's diverse capabilities that he mysteriously doesn't fully exploit with LAMB OF GOD. The same can be said of his performance on SLIANG LAOS's "Axis Rot" which also boasts his melodic, sometimes quavering barking.

While Blythe steals the show, the entire band, in fact, shows that the members individually are capable of so much more than typically displayed with LAMB OF GOD in a way that would make sense within their format. The collective seems to have fallen into a rut with its last few albums, offering little more than a formulaic contemporary mainstream metal appeal. Perhaps this revisitation of the group's earliest of days will inspire it to break the mold and challenge itself as it once did. The group can indeed move forward by looking back. Regardless, "Legion: XX" is a tour de force of metallic mayhem that has the power to act as a gateway for young fans to discover decades-old, genre-pioneering artists that paved the way for LAMB OF GOD in the first place.