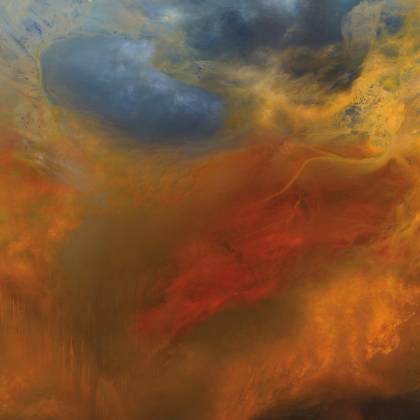 Greg Anderson is a key figure in the realm of forward-thinking heavy music. He is a co-founder of Southern Lord Records, and he's the guitarist for doom fiends GOATSNAKE. Additionally, he has worked on a variety of projects alongside Stephen O'Malley, a revered artist in his own right—both in terms of music and visual arts. Anderson and O'Malley have collaborated on the bleak death doom act THORR'S HAMMER, the psychopathic band BURNING WITCH, and the ominous and raw doom supergroup TEETH OF LIONS RULE THE DIVINE that featured Lee Dorrian of CATHEDRAL and NAPALM DEATH.

In spite of the two men's impressive resumes, they're primarily known for their artistic connection that is SUNN O))) , the avant-garde, blackened drone band that has been blowing speakers with tinnitus-inducing cacophony for over twenty years. The duo's early work was defined by tremendously loud, snail-paced doom that literally shook the floors and walls of venues. They've never dialed back their obsession with amplifier madness, yet the musical partners have gradually incorporated a variety of styles, including noise rock and dark ambient—with the assistance of notable guests such as noise rockers BORIS, MAYHEM's notorious frontman Attila Csihar and electronic noise madman MERZBOW—as SUNN O))) 's career has progressed. Come 2019, the druids have returned with "Life Metal", the first of two releases the band has scheduled for the year.

The act's collaborations have sometimes, arguably, found the unit drifting too far from the original design and without a true sense of cohesion. And while "Life Metal" does include its share of guests, not to mention the production work of none other than Steve Albini (NIRVANA, NEUROSIS),the two men who are SUNN O))) 's heart and soul have confidently gripped the reins. They successfully manage monstrous sounds on four lengthy tracks toward ends that that are hypnotic and profound. "Life Metal", like much of SUNN O)))'s music, offers near religious experiences for those who are both inclined toward the approach and patient enough to allow the noise to consume them.

While the majority of the material is awash with textured layers of sound that move slowly and powerfully with the subtlety of shifting tectonic plates, there are certain moments, predominantly involving guests, that stand out more than others. When cellist Hildur Guðnadóttir sings material that was lifted from ancient Aztec poetry during "Between Sleipnir's Breaths", her voice arrives with subdued yet angelic magnificence. For some, SUNN O))) comes across as an exercise in pretentious excess. But for devotees who do connect with the band, succumbing to the music's transcendental and hypnotic appeal to the point of zoning out and drooling seems inevitable.