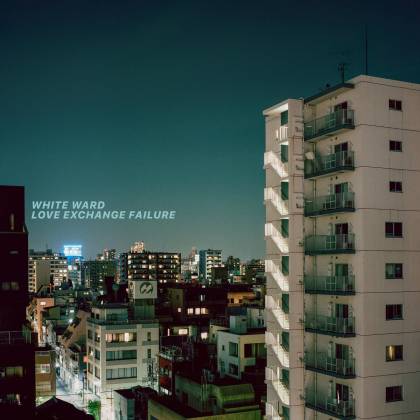 Black metal went weird a long time ago, but few bands have been so willfully irresponsible with the genre's core values as WHITE WARD. "Love Exchange Failure" is the band's second album, but it sounds like the mature and meticulous work of instinctive originals. Strap yourself in and prepare to be enjoyably freaked out.

The first four minutes of the opening title track offer a bewildering plunge into a hazy, film-noir world that bears more relation to BOHREN & DER CLUB OF GORE or some of JOHN ZORN's more lugubrious cinematic work than it does to anything meaningfully blackened, and it's an early indication that Ukrainian oddballs WHITE WARD have drifted even further away from that original grim blueprint. The core of the song itself takes things back to more straightforward, riff-driven evisceration, but even within WHITE WARD's wall of blastbeats and scabrous scree, an admirable knack for creative lawlessness is perceptible. It rears its head again midway through "Poisonous Flowers Of Violence", wherein flat-out aggression steadily mutates into a pretty but sinister waltz, underpinned by a dense rush of noise that slowly builds and then disintegrates, to reveal a gorgeously mournful saxophone and piano outro. On the surface, much of "Love Exchange Failure" belongs happily to a fairly modern strain of epic black metal that hedges its bets between old school ferocity and post-everything atmospherics, but WHITE WARD have the edge over most of their contemporaries because they embrace every aspect of their sound with the same breathless conviction. Heavy on melody and sturdy of gait, something like "Dead Heart Confession" could easily be misconstrued as not being terribly adventurous at all until it veers suddenly off course and back into macabre, Lynchian horror-jazz territory. Meanwhile, there is really no easy way to explain "Shelter": five minutes of clattering, improvised piano blended with feedback, noise and feral, disembodied screams, it's a genuinely startling five minutes that once again whips the rug from under the listener's feet.

"No Cure For Pain" is even more bewildering. Delicate keyboard motifs lead to more snail's-pace, somnambulant jazz, but this time the mood is sustained for a little longer, which makes the eventual eruption of shrieking, hate-filled extremity all the more exhilarating. After several minutes of all-out war, we're sucked back down the lysergic rabbit hole again, with more twittering sax and several yards of thick reverb, only to erupt into a dissonant but incisive closing chorus.

As they demonstrated on previous album "Futility Report", WHITE WARD are not afraid to step away from metal completely if it adds more weirdness to the experience. "Surfaces And Depths" features guest vocalist Renata Kazhan and is a scintillating, baroque torch song, with shades of SIOUXSIE and an almost FLOYDian sense of sonic space; it's definitely one for the goths, but it's also a particularly stunning curveball on an album that has no shortage of them. In fact, it's hard not to wonder if WHITE WARD might become even more enthralling by abandoning metal more often. That said, the closing "Uncanny Delusions" showcases a partial return to crazed fury, but not before another guest vocalist, Ivan Kozakevych, allows his regal baritone to lead us through a shimmering, glacial, post-rock dreamscape. When the guitars finally kick in, the pace remains slow and funereal; a keening sax solo spiraling over the steady crawl towards a dizzying collage of vicious hooks and densely layered pomp.

One of the most inventive and mischievous bands currently operating in black metal, WHITE WARD torched the rule book before they even started. "Love Exchange Failure" is the wonderfully confusing but endlessly fascinating result.