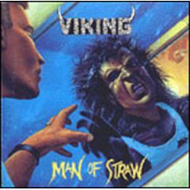 With this, their second release, the Lost and Found label is quickly becoming a benchmark for how these limited reissues should be done. The second effort from Los Angeles cult favorites VIKING is the latest album to come down off the high-priced eBay auction block, available again for all who missed it the first time, with killer liner notes, bonus tracks and more.

Stylistically, VIKING were evolving a couple steps behind their buds in DARK ANGEL (the band guitarist Brett Eriksen later joined). Their stock in trade was manic thrash with plenty of impressive riffs, lots of speedy tempos and double-kick drums. Like DARK ANGEL's Ron Rinehart, VIKING throat Ron Daniels (credited as Eriksen to play up the VIKING theme and an alleged "brotherhood" with Brett) spat lyrics with venom, but could also employ a rather bombastic, melodic voice to carry a tune when needed.

If I had to choose only one of their records, I think I'd give slight preference to VIKING's debut, "Do Or Die" (still not officially available, though heavily bootlegged) — it's got a wild-eyed, off-the-rails chaotic looseness that makes it more compelling. But "Man of Straw" was the sound of thrash metal's vanguard in the late 1980s, growing up and evolving into better musicians, more aware lyricists, and more involved songwriters. It was the time when thrashers seemed almost desperate to prove to the world that their music of choice was more than just noise — while VIKING never carried this technical ecstasy to DARK ANGEL's oft-cited conclusion of 246 riffs on "Time Does Not Heal", they do exhibit a little maturity amongst the neck-snapping riffing and frenzied beats.

That's not to say "Man of Straw" doesn't thrash righteously — this album stands up next to anything coming out of California at the time, as potent as "Fabulous Disaster"-era EXODUS without the penchant for throwaway novelty songs (although VIKING's cover of Pat Benatar weeper "Hell Is For Children" is pretty corny — one can only imagine how much better a planned version of Paul McCartney's "Live and Let Die" would have worked as a thrash song, had it materialized). Whatever the reason for this band's relative lack of attention back then, their contributions to metal still hold up well to this day, and deserve to be heard.

The highlight of the bonus tracks are two ripping demo cuts from 1986 — "Scavenger" and "Do or Die" would have knocked any tape-trader on their ass back then! "Abortuary", the 1989 demo for VIKING's scrapped third album, seems a little less inspired, due perhaps to the drum machine in use, or the newly-born-again Daniels's stridently pro-life lyrics and overwrought chorus (a little of that melodic vocal goes a long way, especially when you just wanna thrash). Finally, we get treated to a live version of "Valhalla", taken from a triumphant opening slot for MEGADETH, that proves the band had what it took to kick out the jams live as well.

Kudos to Lost and Found for shining light on another all-but-lost classic! This particular strain of thrash didn't get the credit it deserved, with even the mighty DARK ANGEL collapsing under the weight of indifference and their own epic visions after the colossal "Time Does Not Heal". History will be kinder to these ambitious thrashers, I think, than their own time period was — VIKING still kicks ass!