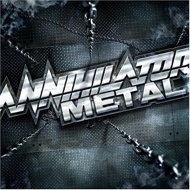 When you play by your own rules and say what you think you're always going to cause some degree of controversy and piss a handful of people off in the process. The upside (and it's a big upside) is you keep your integrity intact and get the immense satisfaction of knowing that your creation is yours and yours alone, and the naysayers be damned. Enter guitarist, occasional vocalist, songwriter, producer, and ANNIHILATOR big cheese Jeff Waters. He wins a few, he loses a few, but he's always got a dedicated fan base and a pretty damn impressive slew of traditional/thrash metal releases to his name. He could have played it safe and gone with another unapologetically thrash metal album like 2005's outstanding effort "Schizo Deluxe", but as he's prone to do he changed things up just a hair and involved an all-star cast of guest musicians for "Metal". In this case, he's come up with another winner that still involves plenty of classic ANNIHILATOR thrash with a few wrinkles thrown into the mix that will probably irritate some folks, but will please many more.

The bulk of "Metal" is straight-up thrash and traditional metal in the vein of "Schizo Deluxe". Songs such as "Clown Parade" (featuring Jeff Loomis),"Chasing the High" (w/ Willie Adler),"Downright Dominate" (w/ Alexi Laiho),"Smothered" (w/ Anders BjÃ¶rler),and "Kicked" (w/ Corey Beaulieu) a few of the tunes that showcase Waters' prodigious riff skills and cracking solos. If you're a fan, you'll dig these tracks. One could criticize the somewhat mechanical drumming (sound and style) of Mike Mangini, but the focal point here is the guitar and I find the skin beating to be more than adequate for what Waters is trying to get across. The axe master even takes over the microphone for another stomping beast called "Operation Annihilation" (w/ Michael Amott). "Haunted" (w/ Jesper StrÃ¶mblad) is an eight-minute track notable as much for its aggression as its arrangement changeups into alluringly tuneful territory. One wonders if the rhythm/riff similar to BLACK SABBATH's "Children of The Grave" during the verse of "Detonation" (w/ Jacob Lynam) was intentional, and in either case the song is a winner. While some are not completely enamored with Dave Padden's vocals, which alternate between the clean/melodic to the gruff/aggressive, I find them distinctive and fairly well suited to the ANNIHILATOR style.

Finally, two of the standout tracks (for different reasons and depending on your point of view) are "Couple Suicide" and "Army of One" (w/ Steve "Lips" Kudlow) The former features Danko Jones delivering melodic clean (one might even say emo-esque) vocals, while Angela Gossow offers some guest growls. The initial impression I got from hearing the track was one of puzzlement (as in, "huh?"),the effect wearing off a few spins later when I realized that the song is actually quite catchy. The track is guaranteed to bug the shit out of more than a few people though due to it straying so far from the signature sound of the remaining tunes. "Army of One" is just plain fun, the ode to '80s metal survivors featuring Padden name dropping the likes of METALLICA, MEGADETH, and BLACK SABBATH.

Mark "Metal" down as another solid ANNIHILATOR effort. I still prefer "Schizo Deluxe" for its righteously metallic approach, but this one is nearly as enjoyable, albeit for different reasons.