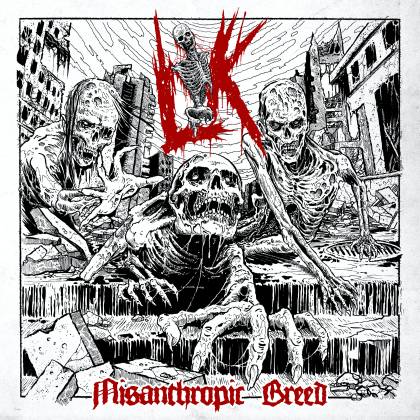 There were a handful of songs on LIK's last album, "Carnage", that were so absurdly exciting that I couldn't listen to them while driving. You know, just in case. The Swedish band have only existed for seven years at this point, but "Misanthropic Breed" proves again that they have virtually no equal when it comes to insanely hard-hitting and obscenely catchy old-school (and fervently Swedish) death metal. If you agree that there are few things more exciting than the first few minutes of ENTOMBED's "Left Hand Path", then you will definitely love the way "The Weird" explodes at the start of this monstrous record. Two minutes and 34 seconds later, it stops abruptly, and "Decay" erupts: another immaculate and utterly punishing burst of hook-laden, brutal perfection.

Maybe it's the production that makes "Misanthropic Breed" so thrilling and undeniable. Those kick drums will make ribcages rattle, and both bass and guitar tones are heroically thick and gnarly. Or maybe it's LIK's superhuman songwriting chops that seal the deal. Or, as seems likely, both. Whichever way you slice it, this is absolutely top of the range death metal, just as Satan intended. The genre has always been a malleable thing, and there's a lot to be said for all the perverse and progressive deathly strains that have emerged over the last three decades. But some brilliant ideas require no refining: from "Funeral Anthem"'s bulldozer grooves to "Flesh Frenzy"'s EXHUMED-like slash-up, LIK's fourth album is a mesmerizing advertisement for the power of a genre that (somewhat ironically) refuses to die, and somehow keeps gaining muscle and momentum. With an even higher strike rate than its predecessor, "Misanthropic Breed" revels in its own relentlessness, so much so that you can almost hear the band's temple veins bulging in time with those pummeling kicks.

This is manifestly superior stuff. LIK have clearly learned from the greats. No one could accuse them of reinventing the wheel here, but if you want a death metal record that will absolutely nail you to the wall, while noisily reminding you why you love this shit in the first place, "Misanthropic Breed" will take some beating in 2020.