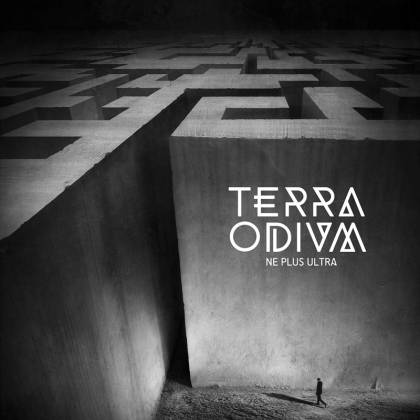 If it's prog metal pedigree you demand, then TERRA ODIUM have plenty. Led by two former members of legendary Norwegian technicians SPIRAL ARCHITECT — vocalist/guitarist Øyvind Hægeland and drummer Asgeir Mickelson (VEIL OF SECRETS)/ex-BORKNAGAR — this new entity may bear a different name, but it's clear that the spirit of the musicians' former band lives on here. Completed by guitarist Bollie Fredriksen (MANITOU),orchestrator and keyboardist Jon Phipps and (just in case the whole enterprise wasn't exciting enough already) metal icon Steve Di Giorgio on fretless bass, TERRA ODIUM should have prog metal aficionados salivating before they've even heard a note.

When the notes come — and yes, there are lots of notes — TERRA ODIUM reveal themselves to be a deeper and darker beast than SPIRAL ARCHITECT, with a sound that favors atmosphere and drama over perpetual showboating, and songs that unfold like ululating, pan-generational sagas; rich in feverish detail, but graced with countless succinct and memorable melodies too. If you've ever marveled to the genius of DEATH, CYNIC, VOIVOD, WATCHTOWER or PSYCHOTIC WALTZ, "Ne Plus Ultra" is proudly in that eccentric, questing tradition, with several extra tons of sonic muscle, symphonic sumptuousness and epic doom majesty thrown in as for good measure.

And what songs they are: "Crawling" is a master class in doom-laden, thrash-powered pomp with a ludicrous quantity of stunning riffs spread across its seven, hypnotic minutes. "The Road Not Taken" is darker, heavier, deathly in delivery but still wonderfully ornate, with epic gang vocals and Hægeland's imperious wail soaring across a slowly mutating wave of lurching grooves and orchestral swell. Pitch-black, icy and haunting, "Winter" takes TERRA ODIUM into more overtly prog-friendly waters, before veering off on a dizzying tech-tangent, wherein Di Giorgio, in particular, does some absolutely insane stuff that will make most bassists want to snap their own fingers off. Both "The Shadow Lung" and turbulent finale "The Clouded Morning" offer warped but nourishing tsunamis of scabrous riffing and waves of steroidal melodrama, while certified curveball "It Was Not Death" strips the band's all-encompassing squall down to an elegant, semi-acoustic, spectral shimmer, with a devastating and startlingly vulnerable vocal from Hægeland.

Prog metal fans will go straight to TERRA ODIUM's first grandstanding epic, of course. "The Thorn" is 12-minutes long and satisfies on multiple levels, from its bellicose levels of heaviness to the haunting keys that seep from slender cracks in the barrage of guitars. Steeped in the horrified bombast of CANDLEMASS and KING DIAMOND's macabre theatricality, but executed with the effortless mastery of progressive virtuosos, it is both a phenomenal heavy metal song and an intricate, perverse construction of great ingenuity.

More than two decades on from "A Sceptic's Universe", these artful veterans have upped the ante once again. A bold soul might even suggest that TERRA ODIUM have delivered a classic at the first attempt. It really, really doesn't get much better than this.