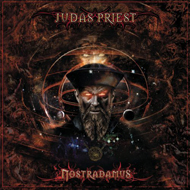 After the mostly well-received "Angel of Retribution" proved that JUDAS PRIEST could mine their own past for amiable, if hardly classic, for-the-fans renditions of their former glories, the future was both wide open and closing in on the veteran British metal band. They seemed to finally be at home in their leathers, less likely to chase after a misguided notion of what the metal world was doing in an effort to seem current. All the same, though, this batch of reunited friends is mostly pushing the 60-year-old mark, which adds a sense of urgency to any projects on the back burner of what is still a formidably loud heavy metal act.

Enter PRIEST's first concept album, and a trip into a realm they seem to be visiting for purely artistic (or perhaps legacy) reasons. It's not like these big metal operas are new to the underground (in fact, no one seems to want to tell Rob, Glenn, K.K., Scott or Ian that the band AVANTASIA did this exact same concept album a few years back). Obviously, though, there are hundreds of thousands of fans out there to whom this'll be a new thing, and PRIEST deserve credit for trying something they've never done before this far into their storied career. This is a huge departure, one only hinted at on previous songs like "Loch Ness" and "Cathedral Spires" — slower, more stately, with lots of acoustics and very little denim-and-leather sparks a-flyin'. It's a more, dare I say, dignifiedPRIEST — one concerned with weighty and mystical concepts and theatrical pacing, rather than three-minute pop song flair.

But is that a good thing? There are definitely stirring moments, like the swelling crescendo of the seven-minute "Revelations", but let's be honest here. We don't look to JUDAS PRIEST for martial tempos and string-laden bombastic heroics. The band's stock in trade has always been energy, from the taut tension of songs like "The Ripper" and "Sinner" to the inexorable assault of "Painkiller". Even their poppier songs, the "Breaking the Law" and "Headin' Out to the Highway" moments, are infused with a forward motion that makes them radio classics to this day. It's hard to swallow PRIEST trading all that in, at this point in the game, for so much ponderous majesty and plodding Andrew Lloyd Webber malarkey.

Let's cut to the chase — "Nostradamus" is a horsepill. It's bloated and stodgy, intermittently interesting, and it creaks with overdone precision — maybe getting it off the hard drive and playing the songs live a bit would have loosened them up a bit, or given Tipton and Downing the perspective to judiciously edit this mammoth down to a single album. It's impeccably recorded and mixed, of course, awash in very important-sounding strings and topped off with Rob Halford's mature, yet powerful, vocals. But when you can get through disc one and go from "Prophecy" to "Conquest" without feeling like you're rocking out, it's hard to stay interested. The only bona-fide ass-kicker on disc one is "Persecution"... the very last song!

Unbelievably, things go downhill on disc two. If these drums aren't programmed, I'll bet money that Scott Travis was on strict orders not to deviate from the original demos — this stiff, ham-handed playing doesn't sound anything like the man's usual attack. And the songs, while occasionally decked out with interesting guitar flourishes, too often drown in their own self-importance and fake strings, sunk under the stifling weight of the Big Epic Statement PRIEST is breaking its neck to make. Bands across the metal spectrum, from KAMELOT to QUEENSRŸCHE to BLIND GUARDIAN, have been able to pull off massive, career-defining story arcs without getting this bogged down in pomp, but they've been at this kind of style for years. PRIEST are trying it on like a new leather vest, thirty years into their career, and it just doesn't fit. Skip to the track "Hope", on disc two, and just wait for Halford to sing "hope... in my heaaaaart" like he's already clearing off space on his bookshelf for a Tony award. This moment encapsulates the shocking change of direction, and the spectacular, overblown mess that "Nostradamus" is, the sort of record that fits into the PRIEST canon so poorly, it makes "Demolition" and "Ram It Down" seem like good career moves.

Let's be fair here — not everything is a total disaster. "Visions" is a bleak, edgy cruncher of a song, when it's not slathered in piano and high Broadway camp, and the driving, sinister riff slices through the slop for a classic glowering midtempo PRIEST moment. "Persecution" and the main part of "Nostradamus", the song, flat-out rip, and you can even make the case for ballad "Lost Love" being a throwback to the "Sin After Sin" days. But there's just no defending "New Beginnings", with its maudlin melodrama, or the ridiculous Italian chorus of "Pestilence and Plague", or the brief Halford-as-Pagliacci bellowing just before the title track gets heavy. As overcooked as most of this stuff is, it's just not interesting — it's as if Nostradamus, the guy, was so inherently interesting, that writing a chorus like "I am Nostradamus!" seemed like all that was required. Lines like "he has seized the day / he is here to stay!" are just embarrassing, the clanking rhymes of a band who were never great shakes at the whole lyrics thing to begin with, and are now trying the same moon/June/spoon tactics that brought us "Hot Rockin' and "Metal Meltdown" on one of history's more interesting biographies.

With apologies to EXODUS, JUDAS PRIEST have created one fabulous disaster with "Nostradamus". Unfortunately for them, album length and sheer metric tonnage of strings do not make an album great. They've dressed up a third-rate Broadway show in the trappings of a heavy metal album, confusing quantity with quality and shoveling bombast at the listener until the only emotion left is a vaguely irritated fatigue. As I've pointed out, there are a few good songs, and a lot of clever bits of ear candy and impressive guitar frippery — but this is the kind of record you'll feel proud to have survived, once, and one that'll quickly start gathering dust next to the rest of the band's much more compelling discography. If you're a diehard PRIEST fan, "Nostradamus" is gonna feel like a velvet-lined kick in the balls, and if you're into long and complex concept albums, you already worship a dozen bands with more of a knack for pulling off a project like this.

Which begs a cruel, but unavoidable question: what was the point?

Keith Bergman discussed his controversial opinion of "Nostradamus" on the June 21, 2008 edition of "The Classic Metal Show". Keith spoke to hosts Neeley and Chris Akin and took calls from listeners for almost an hour. Check out the audio below.