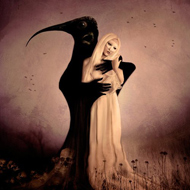 Following the signing of IN THIS MOMENT, and a decent release in "Beautiful Tragedy" that has gotten the band a fair amount of exposure, Century Media seemingly thought a similar album from Montreal's THE AGONIST would be a good idea. "Once Only Imagined" does have its moments, but the metalcore approach with the alternating angelic and gruff/screamy vocals of Alissa White-Gluz works for a couple of songs, but ultimately becomes forgettable.

The main problem with "Once Only Imagined" is the generic quality of the music. Sure, there are heavy riffs and tough rhythms, but much of it ends up sounding ho-hum. The selling point is the melodic vocal lines of White-Gluz, but there are only a few tunes that could be considered catchy, perhaps the standout being "Rise and Fall". Even then, the song is one of those that makes one say, "hey, that's not bad", but that's about it. Quite honestly, her clean vocal lines on several other tracks are not all that impressive, primarily because the underlying melodies are not that strong. If you were seeking the album only for its metalcore basis (the dissonant licks, the scraping riffs, etc),then you still may not be bowled over.

Maybe it is the fact that a trend for this style of metalcore seems to be forming and the mediocre acts are being dragged along with the few that do it well. Or maybe "Once Only Imagined" is nothing more than an average metalcore album with female vocals that work once in a while, but rarely stick to the ribs. There is nothing unacceptable here, and even a few bright spots, but generally speaking this is a collection of songs that will primarily appeal to the metalcore completists. Something just isn't clicking for me on this one.