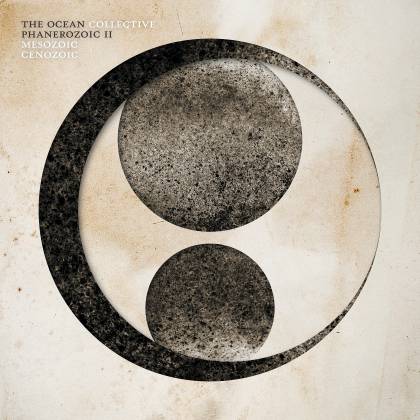 The doomy prog metal generated by THE OCEAN has always been wrapped in an apocalyptic aura. But when the German collective began their two-album "Phanerozoic" suite in 2018, there was no way they could have known that the lyrical themes would be hitting incredibly close to home by its completion in 2020. "Phanerozoic II: Mesozoic | Cenozoic" was produced before the current pandemic crisis, but conceptual themes centered around the extinction of multiple species cannot help but to project a timely prescience. The second chapter of this story would be haunting enough thanks to its lyrical content, but this story, in the hands of a band that long ago mastered the art of blending prog ambition with sonic power, simply adds to that specter.

Given that their latest is the second half of a two-part suite, the start of the record definitely drops the listener in medias res as opposed to a standard start-to-finish standalone record. "Phanerozoic II: Mesozoic | Cenozoic"'s first two tracks are the lengthiest tracks on the record. "Triassic" begins with dark Americana guitar strumming that is eventually joined by a rumbling bass line and subtle synth-work lurking underneath, before vocalist Loïc Rosetti comes in with robotic sing-speak vocals. The opening passage sounds like something that could have been on a later-era TOOL record, though thankfully THE OCEAN takes that foundation to a much more interesting place. The atmosphere of the first few minutes is supplemented by layers of harmonized guitar work from Robin Staps and David Ramis Ahfeldt, all while Rosetti proves adept at juggling his understated sing-speak vocals with more ferocious metallic growls. "Jurassic | Cretaceous" sees the band layering in stuttering guitar riffs and tasteful piano work, with the apocalyptic themes of the lyrics being enhanced by forays into KING CRIMSON-esque chord progressions and additional guest vocals from Jonas Renkse (KATATONIA).

The tracks from this point forward are all a bit shorter in length, though between them there are still plenty of twists and turns. "Palaeocene" is a furious ripper with harsh barks from guest vocalist Tomas Liljedahl (BREACH),and bassist Mattias Hagerstrand still gets to show off some understated beauty halfway through the track. His bass lines get more room to shine during "Eocene", a simmering burn amplified by Rosetti bellowing about end times on the horizon. "Oligocene" is an instrumental that continues to fuel the slow burn before Rosetti returns with the record's sludgiest vocal growls on "Miocene | Plioscene". Those growls give way to muted warnings of the album's overall message, before the group embarks on "Pleistocene", the record's artsiest musical statement. That track sees the band leading with a collage of piano and faux-orchestral work from keyboardist Peter Voigtmann, before coalescing into a furious flourish of bombardment bashes from drummer Paul Seidel and more fierce shrieks from Rosetti. "Holocene" serves as an appropriate album-closing comedown before it just abruptly ends, like everything did for species of the past, and will for species of the present and future.

If you are looking for escapist music experiences to help you cope through 2020's current events, it is definitely recommended that you go elsewhere. If you are looking for an album that very closely mirrors and communicates anxiety about the survival of our species for catharsis, THE OCEAN delivers what may be the most on-the-nose record of the year.