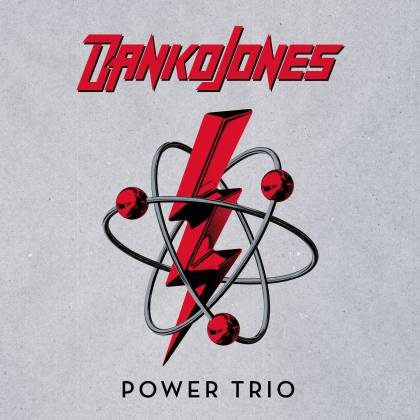 From diehard metalheads to mainstream rock fans, everybody should know DANKO JONES by now. Toronto's finest balls-out (yup) power trio have been a force for rock 'n' roll excellence for 25 years now, and their tenth full-length arrives at a time when Danko himself has never been a more necessary presence in the world of heavy music. But despite having spent much of the last 18 months elegantly dismembering dunderheads and racists on social media, the Canadian has always had his eye on the prize, and "Power Trio" is yet another sweaty, life-affirming triumph.

It's hard to think of a band more painfully unsuited to 18 months of inactivity. "Power Trio" sounds like the work of three musicians with an excruciating itch to scratch, and the sheer energy that erupts from every performance reaffirms that DANKO JONES are a live band, first and foremost. Nonetheless, this is the best sounding record they have ever made: perhaps the heaviest, too. Danko's guitar tone throughout is simply godly. Just like the band's sound, it's the perfect amalgam of hardcore grit, classic rock clangor and trashy fuzz, and effectively ensures that the only way to listen to this record is at sanity-threatening volume. There are countless bands out there peddling a classic rock formula of one kind or another, but there is nothing self-consciously retro about what DANKO JONES have increasingly refined over the years. Instead, this is pure, unadulterated Big Rock, and as timeless as the tales of love, lust and getting loose that are the trio's speciality.

Fans will have heard the singles, of course. "I Want Out" (not a HELLOWEEN cover, although that's a thought for the future!) and "Saturday" are instant anthems for the age of lockdowns, with giant choruses, razor-sharp riffs and lashings of lascivious charm. "Start The Show" is even better: a thunderous call to arms with indecent levels of urgency and swagger, it sweetly encapsulates the DANKO JONES philosophy of unrelenting rock 'n' roll evangelism. "Let's Rock Together" does much the same, but with a colossal twinkle in its eye and a riff big enough to give HELMET sleepless nights.

As ever, there are moments when Danko's libido takes center stage: the fuzz-rock fist-flurry of "Good Lookin'" and the superbly titled "Blue Jean Denim Jumpsuit" are irresistible, while "Flaunt It" takes the band back to the thuggish, turbo-punk and snarling simplicity of the "We Sweat Blood" era.

Ultimately, this is a master class in songwriting and bullshit-free rock 'n' roll thunder. "Everybody knows you're killing it, everybody knows you're on fire!" yells Danko amid the sinewy radio-rock perfection of "Get To You". Deep down, he probably knows he's singing about his own band.