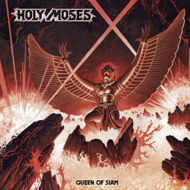 I'll be happy as a German drowning in a vat of beer if HOLY MOSES albums keep getting reissued at a decent pace, till everything from this quite enjoyable second-tier thrash act is back in print and available on the shelves. However, it's gotta be said, in the interest of total honesty, that debut LP "Queen of Siam" is one rough-and-tumble affair, interesting as a historical curiosity but a bit clunky and primitive in its thrashing assault. It's hard to believe the same band had evolved enough to bash out the thoroughly stellar "Finished with the Dogs" only a year later!

Vocalist Sabine Classen's raw, throaty croak is an embryonic snarl in 1986, sounding on occasion like a curious mix of Cronos and Popeye (see "Walpurgisnight"). The guitars are thick and blocky, too, with very little of the thrash finesse they'd later display — there are still plenty of vicious and chunky riffs, but there's a lot more ham-fisted and basic picking, simple to the point of being remedial. There's an almost punk lunkheadedness going on in midtempo songs like "Bursting Rest" and "Dear Little Friend", which leads to a directionless lack of energy.

But there are still moments of primal metal glory to be found here, as on the scorching and multi-faceted instrumental "Torches of Fire" (misspelled as "Torches For Hire" on the back of my promotional CD). The title track manages to cram some intensity into a rather straightforward, midtempo song, while elsewhere the band fails to do so (see the rather drab "Devil's Dancer"). I guess I can honestly only recommend "Queen of Siam" to those who've enjoyed the band's other works first – from 1987's "Finished With the Dogs" to last year's "Strength, Power, Will, Passion, there's a lot of must-haves in the discography. While this one has its moments, it's more or less for the diehards only. (That goes double for the demo tracks, by the way, which are very much homemade recordings of the era. Classen sounds like she's about to devour whatever toy microphone was dredged up for the session, while the drums sound like boxes and the guitar amps might well be in the neighbor's house. Interesting, pretty cool to hear, but definitely not something a casual fan needs to own.)