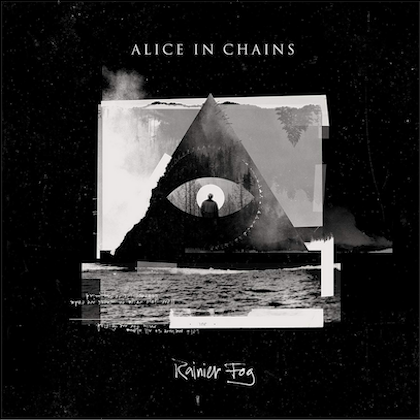 When ALICE IN CHAINS regrouped in 2009 with that year's "Black Gives Way To Blue", longtime fans of the Seattle grunge-era rock icons approached its release cautiously. Vocalist Layne Staley left enormous shoes to fill in the wake of his death in 2002. With that 2009 release and its 2013 follow-up, "The Devil Put Dinosaurs Here", the group bounced back to rejoin the modern rock scene as a vital band, commercially and critically. This was due to new vocalist William DuVall and the rest of ALICE IN CHAINS staying the course in the group's songwriting, content and confident in its well-worn sound and sticking with what worked for the band previously, instead of attempting to sound more modern for what rock radio had become by 2009.

The integration of DuVall into the vacated vocalist space continues to pay dividends on the band's newest record, "Rainier Fog". While ALICE IN CHAINS' modern-era lead voice doesn't quite match the vocal intensity of Staley – in part simply because he isn't channeling the same demons that were driving his predecessor – DuVall's vocal melodies slide perfectly into guitarist/vocalist/songwriter Jerry Cantrell's existing blueprint. Cantrell and DuVall's vocal pairings shine immediately from the opening track. "Rainier Fog" leads off with "The One You Know". The song is a relatively low-energy stomper, but as DuVall and Cantrell coalesce their vocal melodies on the chorus, the stage is set for another album that will be pure comfort food to longtime ALICE IN CHAINS fans.

From the second track that shares its namesake with the album title and forward, "Rainier Fog" is a fairly safe by-the-numbers ALICE IN CHAINS album. While the group's edge has dulled with age, and there are no tracks here as instantly catchy as "Check My Brain" from "Black Gives Way To Blue", a record that scratches all of the sweet spots we've become accustomed to is preferable to any attempts to modernize or otherwise fix what isn't broken.

Cantrell has long been one of the modern era's more underappreciated rock guitarists. While the vocal melodies will always be the most signature aspect of the ALICE IN CHAINS sound, Cantrell's guitar shredding seems a bit more prominent on "Rainier Fog". His rhythm riffs are as crunchy as ever, but his solo work really jumps out in the first half of the record, most notably during the bridge on "Red Giant" and during the dirty blues trudge of "Drone". Acoustic guitar work that underpins tracks such as "Fly" and "Maybe" provide a haunting atmosphere that would have allowed those tracks to fit comfortably on 1994's "Jar of Flies".

The new record is a mostly mid-tempo effort. Later track "Never Fade" is a fast-paced heavy rocker that is quite infectious, though a couple more of those tracks would have been welcome during the first two-thirds of the record as well. There are also a few tracks that are overly stretched out in their running times. Album closer "All I Am" is a 7-minute acoustic-driven attempt at an epic crescendo, though realistically it presents about five minutes of actual ideas. The aforementioned blues stomp of "Drone" would have had more power as a three-to-four-minute interlude, instead of the six-and-a-half-minute drag it becomes at that length.

Those minor quibbles aside, "Rainier Fog" is otherwise business as usual for ALICE IN CHAINS, and most fans that are longtime listeners will enjoy the record. It's unlikely to rocket to the top of the preference list in the band's discography, but Cantrell's guitar work and the duo vocal melodies of Cantrell and DuVall remain comforting to the ear.