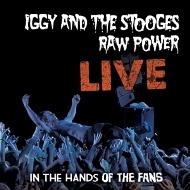 IGGY AND THE STOOGES

Raw Power Live: In the Hands of the Fans

Whether you were there to experience the free form expression of primitive urges and the unchecked violence or only read about it in any one of numerous publications documenting punk rock's early history, you must be aware of the massive, transcendent influence of THE STOOGES. 1969's self-titled album and 1970's "Funhouse" formed the proto-punk basis that inspired so many bands intrigued with the channeling of unfiltered primal rage into musical rituals of defiance and gang-banging celebrations of frontal lobe overrides.

But it was 1973's "Raw Power" from the renamed and reignited — thanks in large part to DAVID BOWIE — IGGY AND THE STOOGES when the stars aligned and out came a collection of songs that were as memorable, even catchy (the chorus to "Search and Destroy" is one for the ages) as they were grotesque (including the recording),savage, and repulsive to anything resembling societal convention. There isn't a bum track in the bunch and James Williamson's guitar playing was just plain incendiary. The album filled a space within which the wheels always seemed on the verge of falling off, in the process keeping energy levels heighted in the most threatening of ways.

Most would agree that you just don't reproduce an album like "Raw Power" nor interpret it on stage three decades later, since what was captured all those years ago was never bottled and sold for mass consumption. But most would also be surprised at just how well IGGY AND THE STOOGES 2010 brought these songs back to life and produced levels of live energy that belied the ages of guitarist James Williams (replacing the late Ron Asheton),bassist Mike Watt, drummer Scott Asheton, saxophonist Steve McKay, and the sinewy 63-year old epileptic seizure on wheels known as Iggy Pop. Well, OK, that Pop's intense franticness and unbridled enthusiasm has never waned isn't exactly a secret.

Performing the "Raw Power" album in its entirety at the All Tomorrows Parties festival in September of 2010, the 180-gram vinyl release (how perfect is that?) of "Raw Power Live: In the Hands of the People" does more than justice to punch-ups like "Your Pretty Face is Going to Hell" and "I Got A Right", or the dark, almost entrancing "Gimme Danger". It brings them back to life in a manner that most fans — myself included — previously thought impossible. The live renditions may not transport you back to 1973, but the amount of spirit recaptured is enough to bring back the dry mouth, the dilated pupils, and what appear to be clothes you've been wearing for four days. Pop's seems to alter his voice to bring it more in line with the original recordings (not to mention going bat shit crazy the entire time),McKay plays his sonic support role to the hilt, and the whole thing goes off like a bomb, which of course brings with it flying debris and a general lack of order. In the context of other groups' live recordings we'd be referring to "warts," which equates to imperfection. But surgical precision never figured into the STOOGES' equation and "Raw Power Live" offers no real counterargument in that regard, the heightened professionalism that comes with aging musicians notwithstanding. Given the choice, fans will almost always choose the studio album (original or reissues) because of the still real risk of electric shock inherent in the action, but "Raw Power Live" offers a second choice that is well beyond acceptable.