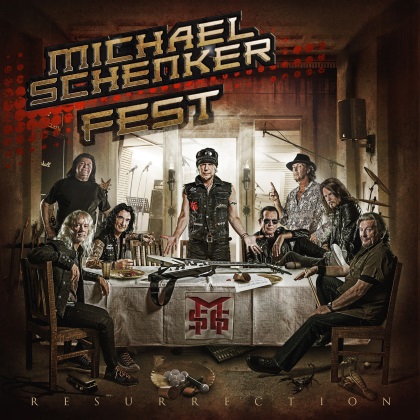 The moment was bigger than anyone could've expected, but the end result was something everyone saw coming. The MICHAEL SCHENKER FEST gave fans the rare treat of seeing three vocalists sharing one stage behind the MSG banner. Robin McCauley, Gary Barden and Graham Bonnet returned to Schenker's court of honor in what appeared to be a one-off celebration of their past glories. The event went over so well, MICHAEL SCHENKER FEST immediately became a recurring concert, leading to this moment. No drum roll needed, "Resurrection" is a brand-new recording featuring all three singers, plus Doogie White, who already leads MICHAEL SCHENKER'S TEMPLE OF ROCK.

All four vocalists are represented on "Warrior" and "The Last Supper" while laying supporting vocals to one another throughout the album. MSG alumni Steve Mann and Chris Glen plus drummer Ted McKenna fortify this recorded class reunion. Once obtuse and soft-spoken, Michael Schenker has of late been seizing every moment to make a musical statement. There may be no love lost between he and his brother, Rudy, but for Michael's purposes, he is generating new material in near nanoseconds. Granted, much of it is regenerated time and again, but always with respect and passion. In this case, "Resurrection" well surpasses the MICHAEL SCHENKER FEST stage affair.

The briskly moving "Heart and Soul" has all the trademark elements of a Michael Schenker jam: a rapid-fire beat and a riffed-out power groove set to classical chord structures. In this case, it has Robin McCauley on lead vocals and a scrumptious set of tagged guitar solos shared with none other than Kirk Hammett, bringing his Hawaiian shirt and a hunger giving "Heart and Soul" tremendous doses of both.

"Warrior" is a unique and entertaining endeavor with all four singers fluidly passing the torch to one another through the gliding DIO-esque thump. Even Graham Bonnet sounds in full control without cutting loose as he's wont to do. He saves his mongrel chops for the gristly, ALCATRAZZ-esque "Night Moods".

Steve Mann, handling double duty on guitars and keys, opens "Take Me to the Church" with a brief synth fugue. Doogie White guides the song on the trail of its winding riffs and though the choruses are a smidge corny, "Take Me to the Church" drives along smoothly. Michael Schenker's solo here is wonderfully dirty, contrasting the overt cleanliness of the track. White also fields "The Girl with the Stars in Her Eyes", which rocks hard on the verses then sashays upon its keyboard-spritzed choruses. The predictably written "Anchors Away" is nonetheless shoved with confidence, spearheaded by a massive riff and Doogie White's wafts.

Anyone who's sat with a Michael Schenker album, particularly a TEMPLE OF ROCK recording, knows there's a set course to each, which means another quick jabbing number drops into the middle with "Everest". The vocals are only sloppy enough to lay some gristle upon Chris Glen's bass and Ted McKenna's throb. The stocky, stomping blues rocker "Messin' Around" thereafter is one of the most fun cuts on the album, and then Michael Schenker keeps the pace hot on "Time Knows When It's Time". The rapid tempo of the latter suits Robin McCauley's—decidedly in the best vocal shape of his contemporaries—towering projection.

The two-stepping jive instrumental of "Salvation" is a pleasant surprise, if minutely reminiscent of Joe Satriani's "Satch Boogie". Michael Schenker uses this vehicle as an opportunity to make his guitar veritably speak through squawks and wahs. The ensemble-stuffed finale, "The Last Supper", is a round table summoning of the voices who have surrounded Michael Schenker in his career, minus Klaus Meine and Phil Mogg. Schenker himself has expressed interest in bringing the latter two into a similar capacity, so stayed tuned, you never know. For this album's purposes, "The Last Supper" knocks on the door of greatness by letting the band roll casually for McCauley, White, Barden and Bonnet to spread an appealing banquet of their talents, desert provided by a juicy solo from Michael Schenker.

Is it considered gluttony to ask for seconds?