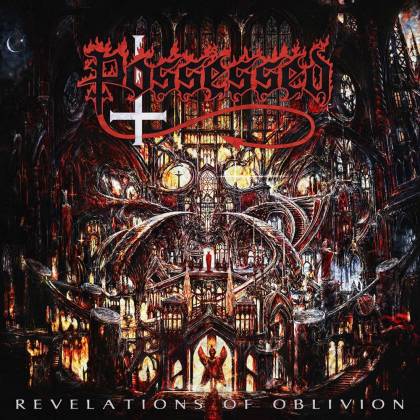 Hellions rejoice! POSSESSED are back and this is absolutely no kind of false dawn.

Full disclosure: this is not so much a review, more an extended love letter to Jeff Becerra. Why? Because comebacks are not supposed to be this convincing or this thrilling. Legendary bands are not generally inclined to return after a lengthy hiatus from the studio with anything even vaguely close to the spiky brio of those revered early works. Doubtless we can all think of examples of bands that have delivered the goods after a longtime away, but not like "Revelations of Oblivion". Not like this. Holy actual shit.

The omens were excellent from a long way off, of course. When Becerra first joined forces with members of SADISTIC INTENT to revive POSSESSED as a live act, it was immediately apparent that the spirit of the band and the ageless atmosphere of those immortal "Seven Churches" anthems were in safe hands. A few lineup shuffles later and the POSSESSED that toured the world in 2017 were very much the finished article. They looked and sounded like the real thing, albeit even more vicious and a little more precise, and with Becerra front and center, that infernal bark as resolute and untamed as it ever was, thoughts of a new album suddenly seemed less like tempting fate than an absolute necessity. No pressure, then.

As it turns out, we shouldn't have worried. Whether you're a diehard "Seven Churches" acolyte, firmly in the "Beyond the Gates" camp or somewhere in between, "Revelations of Oblivion" is such a monstrous reaffirmation of this absurdly influential band's original ethos that it almost defies belief. If early teasers "Shadowcult" (performed live for the last few years) and "Abandoned" (released in demo form on Nuclear Blast's latest "Death...Is Just The Beginning" comp) didn't blow your skull clean off then (a) you've visited the wrong website and (b) nothing else on "Revelations..." is likely to change your mind. But, if you consider yourself to be a fan of any kind of extreme or old-school metal, POSSESSED have just delivered a major album of the year contender and a proud middle finger to anyone that doubted Becerra's creative resolve.

First and foremost, these songs are all forged from the same unassailable death metal template that POSSESSED laid down in '85. Yes, the album's production acknowledges modernity and packs a cutting-edge punch, but there is filth under its fingernails and bats in the sonic belfry, stirring up shit. As powerful and superficially polished as the likes of "No More Room in Hell" and "Damned" are, it's an unearthly miasma of rawness, ugliness and hellish intensity that dominates, conjuring a sense of danger and mortal disquiet that is noticeably absent from the vast majority of contemporary death metal.

In the end, however, it all comes down to the songs and these are all, without exception, outright face-rippers. Built around a shrewd hybrid of "Seven Churches" fire 'n' fury and "Beyond The Gates"-style evil thrash, everything from the blackened sprint of "Dominion" to the epic grotesquery of "Omen" hits the bullseye. No weak riffs, an endless stream of goosebump-inducing solos and lashings of that voice, bellowing into the void, reminding us that "in the end, we all shall rot" and reclaiming death metal once and for all. By the time "Graven" makes a credible bid to be one of POSSESSED's most exhilarating songs ever, you will either be fighting back tears of extreme metal satisfaction or committing to a life of Satanic mischief. Either way, mission accomplished.