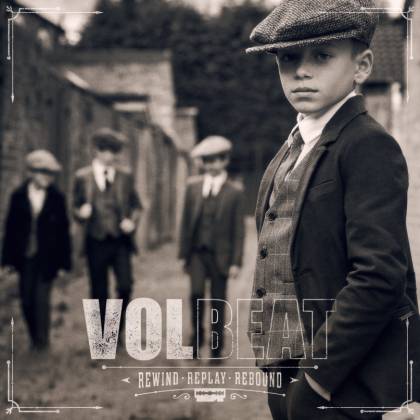 The primary strength of Copenhagen rockers VOLBEAT — dating back to their 2005 debut, "The Strength / The Sound / The Songs" — has been their ability to juggle multiple different songwriting angles within their sound. The band's road to their modern wave of popularity has been a long and winding one, but their dexterity at wrapping Scandinavian metal riffs and catchy arena-rock choruses within a rockabilly aesthetic has long given them the ability to appeal to multiple factions of hard rock and heavy metal fans. The release of 2016's "Seal the Deal & Let's Boogie" saw VOLBEAT attain their greatest mainstream crossover success yet, with singles breaking through with American rock radio and positioning on festivals in that musical realm.

Their latest record — "Rewind, Replay, Rebound" — sees VOLBEAT continuing to balance the act of juggling the multiple aspects of their sound. This time though, the band does seem to be laboring a bit more strenuously to please their various songwriting masters. The musical tightrope that the band has walked throughout their career has always been precarious. But now with the added strain of maintaining a flair for singles that will play well to the portion of their fan base that found them through rock radio, the extremes are a little more jarring.

The album starts with "Last Day Under The Sun", a track overloaded with '80s rock-radio catchiness and riffs cribbed from the pop-metal side of AC/DC records from that era, as band leader Michael Poulsen's now-trademark croons propel a singalong chorus bolstered by returning backing vocalist Mia Maja. "Pelvis On Fire" is the earliest display of the band playing towards those drawn to their rockabilly image. While the track starts as a fast-paced bar rocker, Poulsen's vocal mannerisms channel the inspiration behind the song name.

It is the following track where the weight of VOLBEAT's juggling act starts to feel a little disjointed. "Rewind The Exit" is an earnest power ballad that is well-executed, with bassist Kaspar Boye Larsen delivering a thick sound and guitarist Rob Caggiano aiming for guitar god status with his solos, as he does on every track throughout the record despite the different musical directions taken throughout.

The band has always had one or two of these sorts of ballads on their records, but the flow from song to song in the first half feels more like different musical voices fighting for attention than it has in the past. This feeling of incoherence is furthered by "Die To Live" coming out as a fast-paced ripper in the vein of QUEEN's "Sheer Heart Attack", complete with guest vocals from Neil Fallon (CLUTCH) and '50s rock saxophone and piano.

All of the above has occurred just in the first four songs alone, with the remainder of the album darting schizophrenically throughout different aspects of VOLBEAT's sound. "When We Were Kids" is a power ballad expressing forlorn emotions for lost youth. Surf-goth guitar licks are the driving force behind the fun creepy rock of "Sorry Sack of Bones". More ominous riffs that show slight nods to Poulsen's days in '90s death metallers DOMINUS are peppered throughout "Cheapside Sloggers" — featuring a guest appearance from Gary Holt (SLAYER/EXODUS) — and "The Everlasting".

Individually, almost every song on "Rewind, Replay, Rebound" has merit in some way. As a start-to-finish album experience, however, the diversity in extremes results in a musical roller coaster that is still functional but is also a little rickety and seems to be on the verge of losing the much-needed bolts to keep it together.