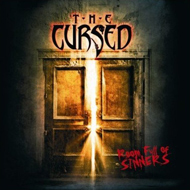 If New Jersey was ever gonna be used as an adjective, for anything besides bricks of dried toxic swamp gunk, it'd have to be busted out for THE CURSED. The prime movers in this side project are former HADES and NON-FICTION axeman Dan Lorenzo and inimitable OVERKILL vocalist Bobby "Blitz" Ellsworth, two Jersey Devils born and bred. And the tunes are seemingly constructed out of that thick, fetid mud, rife with the decaying bones of a few unlucky mob informers and enough steaming industrial runoff to give a whole school of carp three eyes. THE CURSED are dense, heavy, crushing and full of more sardonic sleaze than an undead game-show host.

The short version: remember OVERKILL's "I Hear Black" album? The one with "Spiritual Void" on it, that stiffed completely and pissed off some of their old-school fans with its thick, SABBATH-y grooves? That's the closest reference point you'll have to where Blitz is coming from here – he's taken on this swaggering, sneering lecher's persona, snarling and crooning with a demented tip of the hat, rarely busting out his metal voice. He pours these pungent, velvety tones over Lorenzo's leaden riffing — if you ever heard the man's NON-FICTION project, you're familiar with that sepulchral tone he can wring out of ordinary gear, and he uses it to full lurching effect here. Never dressing up a riff with extra notes when a simple slab of open chords will do, Lorenzo is the master of heavy minimalism here, opting to crush with attitude and weight and let Blitz tap-dance in the spotlight.

Highlights include the steamrolling, slightly manic "Wij Leven Als God in Frankrijk", the menacing groove of "Generate Her" (a song which sends Father's Day cards to "Hand of Doom"),and the soft-shoe jazzbo weirdness that is "Serpentine Slither". Topping all that is the one-two slam of "Breaking Her Down" and "Best of the Worst", a disjointed slagpile of smoldering riffs that descends into stoner rock territory and allows Blitz to shriek a little without shirking the growling-old-junkie-in-the-park voice he's taken on. The whole project fairly drips with a dirty funk, the aura of stale cigarette smoke and illicit fucking in unclean hovels on a side of town where no one has any legitimate business.

What do you even call this shit? "Doom sleaze?" It's as dirty and disease-ridden as Steven Adler's knee pads — but in terms of sheer heaviness, THE CURSED have the clanging brass balls to hang with CROWBAR, if not CANDLEMASS. It's just New Jersey, man — it's foul and wrong and dangerously addle-brained, but damned if it isn't a good time. You could do a lot worse with forty minutes than listening to these two disgracefully aging bastards cut up. Let's hope they consider some live work, because this'd be something to see, provided one's shots are up to date, of course.