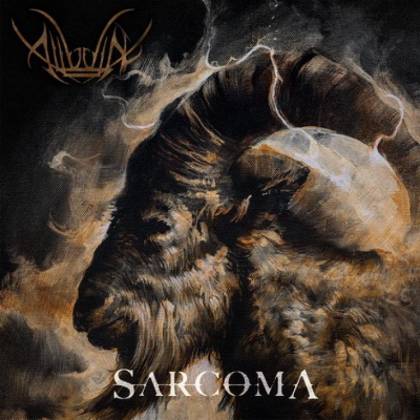 For those who worship at the twin altars of bone-crunching brutality and virtuoso showboating, ALLUVIAL's debut album, "The Deep Longing for Annihilation", was plainly one of 2017's most impressive debuts. Guitarist Wes Hauch is increasingly one of the most admired around, particularly when it comes to modern death metal's cutting edge, and associations with everyone from THE FACELESS to Devin Townsend have, quite rightly, contributed to turning this previously low-key project into a major concern. "Sarcoma" would probably have risen to the top anyway, such is its quality, but there is a strong sense that NUCLEAR BLAST has snapped this up partly to make sure that it doesn't get lost amid a flurry of like-minded underground releases. In essence, this is so obviously a superior manifestation of modern extremity that putting a big label's weight behind it seems the only sane way forward.

Hauch isn't the only star of this show, incidentally. ALLUVIAL are a dizzyingly proficient bunch, with a sound that employs all of technical death's complexities and bravado without ever settling for the generic. With the same sort of freewheeling spirit that made recent albums by the likes of RIVERS OF NIHIL and BEYOND CREATION so enthralling, "Sarcoma" gleefully side-steps death metal expectation, veering off on a string of rhythmic and textural tangents that, rather cleverly, still deliver the required, rib-shattering punch.

The gauntlet is hurled down within the first few minutes: "Ulysses" is a thrillingly belligerent opening statement, built around an unstoppable, machine-gun groove but doggedly progressive in intent, as riffs churn and mutate and the song's unorthodox but utterly ripping evolution unfolds, an irresistibly downbeat chorus included. We're still firmly in death metal territory, but ALLUVIAL sound hell bent on bending the template into grotesque new shapes. Even the album's two most straightforward tracks exude an air of willful subversion. "Thy Underling" delivers an unapologetic riot of lobotomized riffing and GOJIRA-esque squeals and scrapes; the title track feeds grim melo-death vibes through the eye of an icy needle, before erupting into a gruesome and bloody breakdown.

But from "40 Stories"'s anthemic, post-metal pomp, the Americans' modus operandi becomes much clearer, as ALLUVIAL rattle upwards through the gears, allowing ghostly melodies to weave their mesmerizing way through an electrified wall of sound. Almost out of spite, "Exponent" switches direction again, thundering down a post-MESHUGGAH tunnel of chrome-plated bludgeon and disintegrating electronics, while "Sleepers Become Giants" goes for the melodic jugular, with another towering central refrain bursting from a dense post-rock deluge. After all that, "The Putrid Sunrise"'s comparatively traditional death metal attack comes as a slight shock. But even when hammering away at a gnarly thrash riff, ALLUVIAL are always plotting their next tangential leap, and "Sugar Paper" is just that, a sturdy and stirring slab of epic, instrumental heavy metal, momentarily infiltrated by another bewildering blast of skin-removing, post-djent riff precision. The closing "Anodyne" pales slightly in comparison, but still provides "Sarcoma" with a bullish and subtly ingenious denouement.

This is a smart and fascinating album, made by men who definitely know their way around their respective instruments. But beyond the blurred-finger fretwork and superhuman acts of percussive athleticism, "Sarcoma" is an album with lots of idiosyncratic charm and some genuinely great songs.