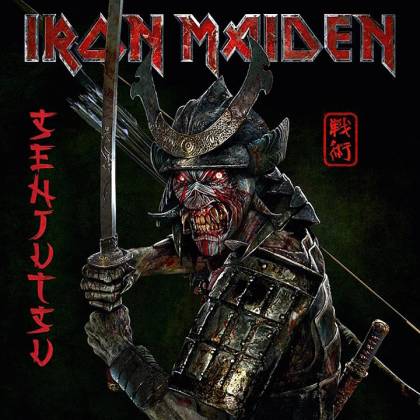 IMO a legitimate, valid case can be made for the assertion that IRON MAIDEN is the greatest heavy metal band of all time. Six years have passed since the release of the English band's last album, 2015's "The Book of Souls", and the legendary act returns now to close the longest gap between albums with "Senjutsu", an ambitious double album. In short, the album is absolutely magnificent. It's one that remains true to the band's core sound while simultaneously facilitating the band's ongoing, unyielding musical curiosity and creativity.

Thoughtful sequencing augments the album's experience. In this case, the title track's tension is broken by the second track, "Stratego". This song is ripe with that ever-so-characteristic IRON MAIDEN gallop, helmed by the rhythm section of McBrain and bassist extraordinaire Steve Harris, and driven by the adroit work of guitarists Dave Murray, Janick Gers and Adrian Smith. While the one and only Bruce Dickinson is known for his over-the-top, soaring pipes, as he has aged, he hasn't lost the power and command in his voice by any means. It's more the case that he appropriately colors the songs, matching calmness and intensity accordingly. As such, his monstrous voice is suggestive and teasing throughout "Stratego", only coming to full bloom during the song's massive chorus.

The featured single and video for "The Writing On The Wall" has brought the song and album considerable attention. But it was a curious choice considering the bold move to embrace some pseudo country elements, which are tastefully and playfully tapped into, but the song is lackluster overall. To be clear, this measure of quality is relative, for the track is still head and shoulders above the bulk of what we hear today in the realm of heavy metal.

IRON MAIDEN is regularly self-referential throughout "Senjutsu", but not in a pejorative way. These winks toward the past tie things together holistically. "The Parchment" is clearly reminiscent of "Powerslave" regarding the high energy and Middle Eastern-style melodies. It's one of several Steve Harris written songs on the album that start off with softer, acoustic intros. Each one of these is distinct, however, and these intros are merely similar compositional units that make sense within the scope of Harris's increasingly cinematic songwriting approach. The latter quarter of "The Parchment" is quite exhilarating, though it takes too long to arrive at that point so late in the song.

"Senjutsu" is a musical marathon exceeding 82 minutes and divided into 10 songs. Considering that the regular nature of verse-chorus-verse is thrown out the window, it's difficult to connect with some songs, even after repeated listening sessions. But with that said, there is so much detailed, nuanced material to enjoy that numerous full play-throughs seem mandatory. "Senjutsu" truly is a "grower," so to speak. Will today's short-attention-span listeners have the patience for it?  We'll have to wait and see, but longtime fans, younger ones and curious onlookers alike would be wise to pick the album up. "Senjutsu" is a modern gem from one of the greatest heavy metal bands ever, if not the absolute greatest.